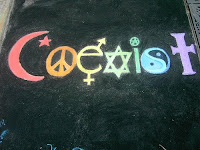 We are a very liberal household. We chose our community in part because it is diverse — racially, ethnically, socioeconomically and, presumably, politically. Many residents who have the financial ability to live almost anywhere frequently cite our city's diversity as a major draw.

Yet few of us are naive enough to believe that we have achieved true integration of these diverse populations. There is still a pronounced achievement gap in most of our schools. There are neighborhoods that are considered "better" or "safer" than others. Children who play together in preschool and elementary school drift apart in middle school and high school — often along racial lines. Still, we try. At least our children know that not everyone looks alike or comes from the same background.

In our home, we talk a lot about tolerating differences, even within our family. My children are so different that I sometimes think they aren't even members of the same species. But we strive for acceptance (except when it comes to college football, as we are devout Michigan fans). So imagine my surprise when my middle boy came home in second grade and asked if it was OK that he was friends with someone who didn't believe in God.

I was stunned by the question. We are Jewish and our children attend religious school, but we are not particularly observant and have certainly never implied that we had a corner on the religious market. In fact, within our own extended family we have plenty of believers of different faiths, as well as our fair share of nonbelievers.

"Of course, you can still be friends," I assured him, and we had a wonderful discussion about how freedom of religion also includes the freedom not to believe. The First Amendment suddenly made perfect sense to this logical child and he moved on to being intolerant of his brother touching his stuff. I patted myself on the back for another parenting job well done.

So imagine my surprise when, a few years later, my youngest child encountered an even more disturbing form of religious intolerance at school — in third grade! A big playground brouhaha arose when ugly words were hurled at a child who said that his family did not believe in God. Parents and social workers were called in, and the school conducted a "Cool Tool" lesson in the classrooms about tolerance. I was proud of the school for addressing the issue directly, and yet something still did not sit right. I was particularly struck by the fact that both these instances of intolerance were directed at children and families who did not believe in God. Differing religious beliefs did not raise an eyebrow, but non belief seemed to be a huge issue.

One of the things I like about Judaism is that the religion itself encourages questions, debates, even arguments (at least within the Reform community). There is a constant quest for knowledge and understanding. We made the conscious choice to bring our children up within this religious setting because most of the people I knew who were raised without any religious affiliation grew up to believe in nothing. We felt it was important to give our children some background that they could learn about, rebel against, embrace or reject — but come to their decisions from a place of interest, knowledge and questioning.

I worry now, however, that by providing specific religious instruction, even in a tolerant congregation, we may inadvertently be teaching them that our beliefs are somehow "right", which almost by definition implies that different believers must somehow be "wrong." I hope this is not true. I hope these examples of intolerance will lead to more discussions, more growth and more tolerance. I hope my children continue to question — us, their religious teachers, their friends and their community — and I hope they do it in the spirit of achieving true diversity.

This is an original Chicago Moms Blog post. When Susan isn't pondering the big questions of religion and politics, she can be found writing at Two Kinds of People and The Animal Store Blog.

Photo courtesy of Jeanne Levy via flickr.com; the chalk art was done by Liza White and Kary Taylor at the Forest Grove Chalk Festival.
Posted by Susan Bearman at 9:56 PM

I wish there were more parents out there that truly felt the same as you. I am an atheist (raised in a Catholic home, but an atheist since a child) and my husband is an atheist. Our daughter is, as a result, being raised as an atheist — not specifically, but she knows that we are non-believers and we are her role models. We do our best to make sure that she has a respect for those with religious beliefs as there are many within our family. However even within my family I have been the victim of attacks for my non-belief and I worry that this will trickle down to her. I have been told that I must be a devil worshiper (Um, no. I don't believe in god OR the devil.) and a relative who didn't know we were atheists made some nasty comments about atheists ruining the holidays (*All* the atheists are trying to block religious songs from being sung in public schools, thus ruining the holidays in their opinion.)

I homeschool, so my daughter is not exposed to the typical playground bullying where this type of thing sometimes arises, but I find myself preparing her for her first negative encounter. Perhaps this is a normal part of parenting, but I still think it sucks.

We atheists are oft' a reviled bunch. From a study posted in the American Sociological Review:

"From a telephone sampling of more than 2,000 households, university researchers found that Americans rate atheists below Muslims, recent immigrants, gays and lesbians and other minority groups in “sharing their vision of American society.” Atheists are also the minority group most Americans are least willing to allow their children to marry."

I applaud not only your tolerance, but your willingness to examine things on a deeper level, as well favoring skepticism and reasoning skills over indoctrination in your children. Bravo!

When I was seven years old, I decided to determine whether or not I believed in God. So I read a children's Bible I found on my parents' bookshelf, even taking it to school with me. Kids started teasing me, calling me "religious." In reality, I was trying to overcome my hunch that there was no god. I never did find that faith, and since that tender age have felt great apprehension whenever atheism or agnosticism comes up in conversation for fear of what people might think if they knew I did not believe in God. This country does indeed have a blatant and often hostile prejudice against non-believers, most of whom I think are like me, people who believe in honesty, respect and doing the right thing by others but who simply do not believe in a god or specific religion. I am glad you are raising your children to be open minded and tolerant of everyone's beliefs or lack of them. I am glad we have such variety in our society. We all have valuable things to contribute.

Wow. You got some great responses. I loved the post, it was very interesting.

Thought-provoking post. Unfortunately, many times religion, sometimes in a subtle way and sometimes not so subtle, teaches us that not believing or not doing things according to its gospel is wrong.

When my daughter was in kindergarten, she was told by a little boy in her class that anyone who did not believe in Jesus Christ was not going to heaven. Being Jewish, this of course troubled her very deeply. She wanted to know why we didn't believe in Jesus Christ and if the little boy was right. Of course the little boy was only repeating what he had been taught. Taken out of context, those assertions can be quite hurtful to others.

This was a great post, thanks for writing it. On my blog (well, before I got pregnant and lost my brain-power) I try to write occasionally about diversity and specifically world religions...its a topic of great interest to me, and I firmly believe you can't understand someone unless you are able to look at them as they see themselves. I'm happy to find another blogger who shares my interests!

Ardis,
in your comment, you tell a story about being teased for being "religious" when you carried a bible to school, and go on to explain that you think this country has a "blatant and often hostile prejudice against non-believers." How does that make sense?

Also, there is a difference between tolerance and pluralism. If I am a devout Athiest, I inherently believe that other people who belive in God are WRONG. That is the whole point of being an athiest. In the same way, if I am Catholic, I believe athiests are WRONG to believe there is no God. If I am Jewish, I believe that Christians are WRONG to believe that Jesus Christ was the son of GOD. Not all these things can be true. That is why each of us has to choose to believe what we believe. We also have a responsibility to accept and allow that other people believe different things than we do, even if we think they are wrong, but we are under no obligation to believe that they are right. Sure there is a chance that I am wrong in whatever my belief is, but that is what Faith is all about.

In response to Amy@UWM,
The story of your daughter in kindergarten was a perfect example of how to deal with diversity. The answer is to have a conversation with your daughter about what the boy believes, and what your family believes and why. The answer is not to ban all such discussion from the schoolyard, or the rest of the public square, which is the situation we seem to be in currently in this country. The latter leaves no opportunity for the "discussions, more growth and more tolerance" that Susan describes in her post.

Just so we are all on the same page, the following definitions come from wordsmyth.net, :

tolerance: the ability or practice of accepting the race, religion, customs, opinions, or the like of other people; absence of negative prejudice; open-mindedness.

belief: a strong opinion; conviction. a notion or idea accepted as true, esp. a religious doctrine.

diversity: the state or condition of being unalike; dissimilarity. a variety.

pluralism: the coexistence of distinct cultural, ethnic, or religious groups within a single society.

coexistence: the act or condition of coexisting, esp. in a peaceful manner despite differences in values, customs, political systems, and the like.

faith: belief in something that has not be proven or is not capable of being proved. belief in, observance of, or fulfillment of one's religious convictions and obligations.

"Toward no crime have men shown themselves so cold-bloodedly cruel as in punishing differences in belief." — James Russell Lowell (1819-1891), poet