Many Ways of Going Forward

There are many ways of going forward, but only one way of standing still. — Franklin D. Roosevelt 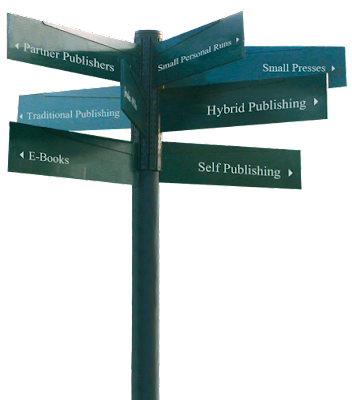 Bet you can guess the theme of this post—there are two kinds of people in the world: those who move forward, and those stand still.

A few years ago, I realized that to avoid being left in the dust of the horserace that is writing, I had better start moving forward. It was a good call. In the five years since I started writing this blog, here are just of few of the changes that have taken place:


You get my point. I was right (I love being right) about how quickly the world of writing was changing—and continues to change. Then why are so many writers still stuck with the myopic vision of publication that reigned for all those decades before the Internet took hold?

I talk to a lot of writers and I honestly believe the number one reason is fear. Fear of change. Fear of technology. But mostly fear that their long-held dream won't come true. You know the dream: being a best-selling, critically acclaimed author published by a big-name house, toasted by the glittering literati, celebrated on national talk shows, and holding court over admiring fans at champagne-laced readings all over the world.

OK, that dream won't come true—at least not for most writers. But it never did come true for most writers. Here's the good news: in the new world order of publishing, there are so many more dreams that are possible for so many more writers. If you are an excellent writer willing to work hard, you can become a published author. You can write online for your business. You can blog about your travels or your hobby or your passion. You can write a book and people will be able to read it in a real live paper version or on their favorite readers.

But you can't do it standing still. And you shouldn't do it unless you have a plan and get to know what's going on out there in the publishing world.

Five years ago, I started this blog with nary a clue as to what I was doing. Then I jumped into Facebook. And Twitter. And Pinterest. And WordPress—first .com and then .org. I learned some code. I learned what worked and what didn't. I started giving classes on social networking. Last fall, I conducted a successful Kickstarter campaign to fund the production and printing of my first picture book, the Animal Store Alphabet Book. I started with a great idea, a fabulous illustrator, and a 21-page business plan. Hard-cover copies of that book came to life on January 1 of this year and today children and bookstores and libraries have copies of it.

Now I'm excited to be teaming up with the dynamic April Eberhardt, a self-described "literary agent for change". We're pooling our collective knowledge and experience, coupling it with our enthusiasm for the ever-exciting, ever-changing world of publishing, and bundling it together into a workshop that we call Pathways to Publication: Choosing the Best Way to Reach Your Readers.

If you want to take a step forward, I hope you'll consider joining us on June 7 in Chicago (the day before Printers Row Lit Fest). Click here for more information and to register. Special thanks to Karen Gray-Keeler and Where Are We Going for supporting this project.

As excited as I am about all these possibilities, and before I started any of this, I learned how to write…because no matter which path you choose, it's the writing that counts.

Have you taken a step off the dime? How are you moving forward?
Posted by Susan Bearman at 2:08 AM 5 comments:

There are two kinds of people in the world: risk takers and scaredy cats. I've been thinking a lot about taking more risks as a writer. I think it's key, at least for me, to be braver, less coy, unafraid to come out from behind my protective armor. It's time for me to stop caring so much about what people will think of me because they might not like something I write. That being said, let's start again.

There are two kinds of people in the world: balls-out risk takers and chicken shits.

There. Do you hate me yet? The funny thing is that I swear like a sailor in real life, but somehow it seems…rude…in print. Using profanity in my writing, however, is not what I'm talking about when I say I need to take risks.

So, in an effort to be less chickenshitty, I'm opening the doors and windows of my comfortable writing home and stepping out into the big bad writing world. I'm joining new groups and exposing myself to new experiences. Like Write Club.

Here's what I say about Write Club:

It's kind of like debate team meets poetry slam—part preparation, part performance. And it's risky. The writers/performers take a risk. They put themselves and their writing out there for the world—or at least the audience—to cheer … or not. There is a winner and a loser.

In case you haven't figured it out by now, Write Club is a take off on the movie Fight Club. Now, I've never seen Fight Club, but even I know the first rule:

Write Club has rules, too, and the first rule is that everyone who attends must tell five to seven people about Write Club.

Here are the other rules.

Oh, and in case you're wondering, no, I have not (yet) stepped into the Write Club ring. But I'm working my way up to it, since it seems that it might be the ultimate expression of Two Kinds of People.

Write Club got its start here in Chicago, and now has chapters in Evanston, Atlanta, Athens (GA), San Francisco, and Toronto. The next bout in Evanston is this Monday, May 6, 7:00 p.m. at Space. In Chicago, the next bout is at The Hideout, Tuesday, May 21, 7:00 p.m. Other cities, check your local listings.

P.S. And just because I'm this much of a word nerd, I looked up the origin of them's "fightin' words." Looks like the phrase was first used by Ring Lardner (a fellow Michigander) in Gullible's Travels c. 1917.