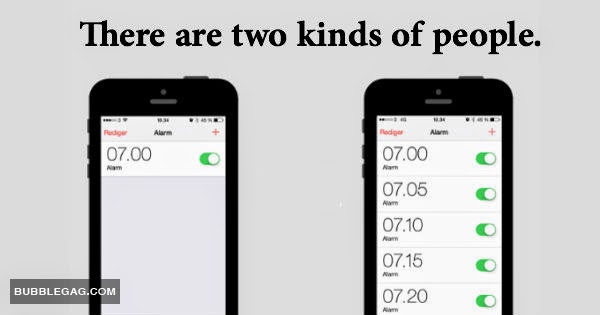 Not long ago, my friend Hey-It's Mike Anderson posted a visual two-kinds-of-people gag on my Facebook Wall. It may or may not have been the image above (I couldn't find it on my feed), but that's not important. What's important is the thing Mike wrote along with the image: "I miss the blog." Hundreds of Several A few other people "liked" his post.

Now, before you go getting all up in my face about how immodest it is for me to tell you this, let me just say that, as a writer, this is probably the best thing anyone has ever said to me. It means that someone READS MY STUFF. And misses it when I'm not writing. This is huge. HUGE, I tell you.

It's also motivating. Not motivating in the sense that I immediately wrote a new post or anything. But motivating enough that I'm finally getting around to it just a few short weeks (months? Mike?) after the gentle nudge. Again, in writer-procrastination time, that is immediate.

You see, half the reason I haven't been posting here is that I have a lot of other work that I'm supposed to be doing. So, I haven't been writing. Of course, that doesn't mean the other work is getting done, it just means that I was leaving open that window of opportunity to do it, you know, eventually.

But, I miss writing when I don't do it. I miss my legions dozens couple of readers, and was frankly thrilled to discover they actually exist.

So, today I'm posting. If you're one of the two (kinds of) people who read this blog, thank you. Leave a comment so I know you stopped by.

I also submitted two poems (I've been told I'll hear whether they've been accepted in two to six months, so don't hold your breath). Who knows. Maybe I'll even get some of that other work done. Thanks Mike. Now look what you've gotten me into.