Here we go again. Haven't posted here in ages. Haven't written (my stuff) in ages. November 1 crept up on me and I'm not at all ready to do this. But I'm doing it. And I've got to say, it feels really good to be writing. How long will it last this year? Who knows. But I'm over 5K words already. I like my idea. What more does one need.

Posted by Susan Bearman at 2:51 AM No comments: 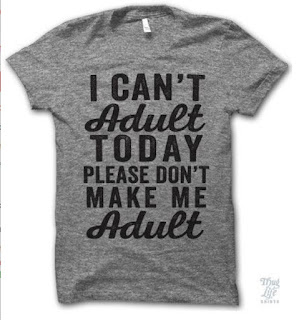 There are two kinds of people in the world: adults and children, and these designations have nothing to do with age.

My world today, at this moment, is crowded with all things adult. I've been trying to suck up all the adultness I can muster to find rational, effective, and productive ways to fight all the new battles that have been launched by our new administration.

In the midst of all that, my best adult role model — my mom (who I am pretty sure was born an adult) — is lying helpless in an ICU hospital bed. There is nothing like a critically ill parent to make you have to adult-up.

Then along came Christine Wolf (an amazing writer), who shared a writing prompt from ChicagoNow: When was the first time you felt like an adult. Thank you for the prompt and the distraction, Christine. I've already paced every square inch of this hospital and you reminded me that writing is my way through things.

It's almost ubiquitous that having children suddenly makes you feel like an adult. My first high-risk pregnancy and my very preemie twins certainly started me down the path to adulthood, but the first time I really felt like an adult was a couple of years later, when the daily traumas of their premature birth were pretty well behind us.

It was an ordinary day with two toddlers (if there is such a thing). I was on the phone getting a fix of adult conversation when I heard a small crash in the kitchen. Upon investigation, I realized Molly had knocked over the trash. Not a big deal. I picked everything up while I continued my conversation.

Molly came up to me and put her arms around my neck and hugged me tight. I finished up my call and picked her up into a hug. She was not crying and didn't seem upset, but she wouldn't let go of me. I set her down and noticed that her fists were squeezed tight. A stream of red leaked from her right fist down her arm. I started hyperventilate. I wasn't great with blood.

You are the grownup, I reminded myself. "Sweetie, open your hand so Mama can see," I told my daughter. She did, and I saw more of the internal anatomy of a hand than I had ever hoped to see. I figured out later that she had picked up the sharp lid of a tuna can from the garbage and in transferring it from her dominate left hand into her right, she had sliced open her palm. Not good.

I grabbed a clean kitchen towel and told her to squeeze it tight. Then I called my husband at work. "Hi …" That's all he got out.

"Molly cut her hand. It's really bad. And I just realized you can't help me." And I hung up on him. Poor man.

About to panic, I once again reminded myself that I was the only adult in the house and that meant, well, that I had to be an adult.

I called my neighbors who had four kids. Ed tried to chitchat, but I told him what had happened. He, being a full-fledged adult, asked "What can I do?"

"Come get Isaac," I said. I grabbed Molly and one diaper bag, practically threw Isaac, his blanket, and the other diaper bag at Ed as soon as he got to the door, and buckled my wounded daughter into her carseat.

A wave of vertigo swept over me as I started the car. "Stop it," I said to myself. "You can do this. You must do this." So I rolled down the car window and spoke encouragingly to Molly all the way to the hospital where they had spent the first five months of their lives.

Molly and Isaac were practically legends at Evanston Hospital. Several people on staff (even in the ER) recognized us. We had to wait quite a while for a hand specialist to make sure there was no ligament damage before they could stitch her up. Molly was stoic. She still had not cried.

Once the x-rays and exams had been taken, a nurse in the room let me step down from being an adult during the most crucial moments of the night. "Look," she said. "You don't need to be here. You won't be able to hold her. We have to strap her down. If you stay, she's going to think you are a co-conspirator. Go take a break, check on Isaac, and when you come back, you can be the hero who rescues her from us monsters."

I wavered for a good 15 seconds before I took her advice and bailed. Some adult! I called to check on Isaac. He was sleeping peacefully at the neighbors. I called my husband to apologize for leaving him hanging and to update him on everything. I waited five more minutes and then I made my way, guiltily, back to the ER.

The nurse was right. Molly stopped crying and reached for me the second I came back into the room. She glared at the medical staff as if they were the devil's own and clung to me as we left to go home and pick up her brother. In her eyes, at least, I was the adult she could count on.

*Thanks again, Christine, for allowing me to escape being an adult for this hour while I played with my words.
Posted by Susan Bearman at 1:20 AM 4 comments: