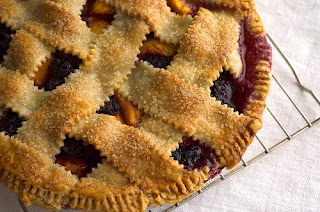 There are two kinds of people in the world: cake people and pie people. Guess which one I am.

I'm a little surprised that I haven't tackled this particular 2KoP dichotomy before, but I'm grateful to Lisa Romeo's Summer Writing Prompt project for reminding me of it. A bit of research shows that both cakes and pies have long, venerable histories dating back to the ancient Egyptians, who are believed to be the world's first bakers.

Cake is fine. It has it's place. Much as I love it, a traditional wedding pie would be a hard to pull off, so my husband and I chose carrot cake with cream cheese frosting. (A mutual disdain for butter cream is one of the things that attracted us to each other.)

But pies (I'm talking fruit pies here) are a different sensation all together. Diet wise, cakes and pies weigh in about the same — both running at a not-exactly-healthy 250-300 calories a slice — but fruit pies somehow feel more virtuous. There's a complexity to homemade fruit pies — sweet and a salty, wet and dry, creamy and flaky, all at the same time — that makes each pie a singular experience.

Pies were originally called coffyns, then pyes and finally pies, and the delicious flaky pastry of our modern tarty desserts does not much resemble the typically inedible crusts of their early ancestors. Back then, the baked shells primarily served as cooking and storage vessels for savory meat dishes. I've had a few meat pies in my day, and a fair share of other crusted dishes, like quiche, but my true love is fruit pies.

Though the romance developed over time, it probably stems back to warm memories I have of baking pies as a child with my grandmother and cousin. My mother's mother was a less-than-stellar chef, coming from the school of cooking where you began making dinner first thing in the morning and boiled or baked the hell out of everything until it was served as barely distinguishable portions of mush and gristle.

That may be a bit harsh, but I will say the woman knew her way around a rolling pin. She made delicious pierogi (Polish dumplings), as well as all kinds of pies. When my cousin Cindy and I, who were the only girls on that side of the family, visited for a day or two, Grandma always made a little extra dough and would give us the trimmings to make tiny tarts. Wrapped in hand-embroidered aprons, we pretended to be grown-up women by pummeling and playing with that dough until it was more like rubbery silly putty than delicate pastry. My Grandma's pies, made from the more tender, earlier version of that self-same dough, were wonderful — delicately lattice woven and flaky on top, moist but not mushy on the bottom. 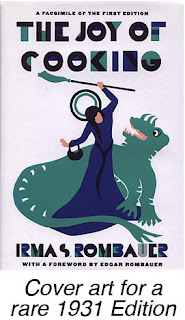 The first time I attempted to make a pie on my own, it was a complete disaster. Though most pastry dough is made from just a few ingredients (flour, some kind of fat, a little bit of liquid, and sometimes salt and/or sugar), it is a deceptively simple recipe, sensitive to atmospheric conditions and insensitive hands. As the Joy of Cooking explains: "No one recipe can precisely convey a sense for the way the dough should look and feel at all stages nor confer the fabled 'touch'. This comes only with practice."

By the time I was old enough and wise enough to try to codify my grandmother's recipes, it was a little too late. She had never written them down and though she tried to convey that "fabled touch", I just didn't get it. Years later, I let Joy of Cooking take me step-by-step to a decent, if not great pie crust, but it was a lonely learning experience and made me wish I had paid more attention to my grandmother while I had the chance.

About 15 years ago, I decided to forego even birthday cakes in favor of pie. Every year since, I have asked for a homemade peach or sour cherry birthday pie. This is a tricky request, since my late September birthday falls just beyond Midwest cherry and peach seasons.

One year, we planned a neighborhood progressive dinner that just happened to fall on my birthday. In a case of pure serendipity, our neighbor Al, who was in charge of dessert, had baked a peach and blueberry pie. I was sure my husband had tipped him off, but he assured me he had not (and he's not one to miss such a ripe opportunity for praise).

Then, one day in 2008, my friend Cindy Fey posted some juicy pictures of pies she had baked. She was a new friend at the time, and when I left a comment about my unabashed love of pie and dropped a few not-so-subtle hints, she commented back that she would bake me a birthday pie. Sure enough, in September of '09, she produced my first-ever baked-just-for-me homemade birthday peach pie. Never has a birthday cake tasted so wonderful as did this pie, dripping with the full goodness of summer and sweetness of friendship baked right in.

I tried to include a clip here of Andie MacDowell singing "The Pie Song" from the 1996 movie Michael, but no luck, so you'll have to settle for the transcribed lyrics, written by Roy Blount, Jr. Maybe this is the theme song for which I've been searching.

Pie, Pie
Me oh my
Nothing tastes sweet, wet, salty and dry
all at once, oh well, it's pie
Apple!
Pumpkin!
Minced an' Wet Bottom!
Come to your place everyday if you've got 'em
Pie
Me oh my
I love pie!

So what say you? Is it cake or pie that tickles your dessert fancy? Just click here to let us know.

P.S. Don't forget to check out the launch of The Chicago Moms. It's official as of today.

Photo credit: Peach & Blackberry pie by Tamara Manning via a Creative Commons license.
Posted by Susan Bearman at 12:29 AM 25 comments: