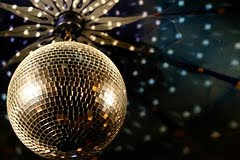 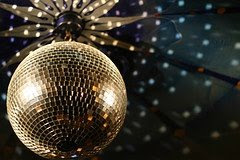 There are two kinds of people in the world: those who believe that in 2009 it's OK to have racially segregated proms and those who don't.

I was shocked to read a recent NY Times story about a high school in Montgomery County Georgia that held separate proms for its white and African American students. I was at least as shocked that this story was a magazine section photo essay, rather than a hard-hitting expose´ or editorial. Perhaps the fact that we're not shocked is the most shocking aspect of this story. You can read my take on it in my new post on the Chicago Moms Blog.
Photo credit: Mirror Ball Amsterdam by yozza/Ewan Topping
Posted by Susan Bearman at 1:43 PM 2 comments:

Confused by the Muse 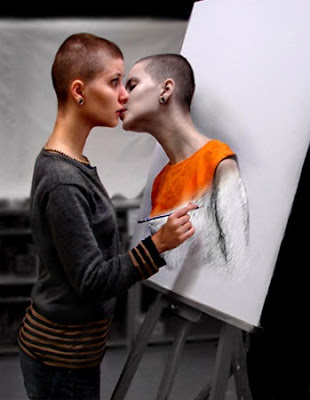 There are two kinds of people in the world: those who have a muse and those who are still searching for one.
I'm a writer, right? An artist. So I'm supposed to have a muse, right? So, where is she — or he — or it? Where's my muse?
In my search, I looked back to high school humanities class and the nine classical Greek Muses of Hesiod's poem Thoegony. You know, those chicks with funny names, who are dressed for a toga party:
Even before the big nine came along, a guy named Pausanias talked about three other muses:
While practice, memory and song seem more directly related to the kind of writing I do, these ladies still leave me cold. Maybe if they were half-naked Greek gods instead of goddess, I'd find them more attractive, but I doubt it. They would still be nothing but a bunch of marble stiffs.
So, what is it that inspires me? I could say my kids, which is sometimes true; but more often than not, it's the words themselves that get me going. I love to play with words. Just thinking about Muses led me to amused and bemused and museology, which I was disappointed to discover is not, in fact, the study of Muses, but rather the science or profession of museum organization and management. You have to admit, museology a pretty succulent word for such a dusty (albeit noble) profession.
I've been reading Courage & Craft: Writing Your Life Into Story by Barbara Abercrombie, who tackles the Muse on the first page of chapter 1:  "Make up a new voice that will inspire you, a voice that will say whatever you need to hear and will drown out all the other, negative voices, both real and imaginary." That's when I realized I already have a Muse: Me. Well, the voice in my head, anyway, who sounds like me, only idealized in every way.
The Me in my head is fabulously beautiful (thin, of course) and smarter than smart, with an IQ hovering around 200.  This Me speaks seven languages in addition to English, meets the world's most interesting and famous people (but graciously treats them like regular folk), and can sing and play a variety of instruments by ear. Did I mention ice skating (Olympic level) and dancing (practically professional)? More than smart, though, this Me is quick and witty, a brilliant conversationalist who always says just the right thing at just the right time. She's also charmingly, disarmingly modest — the kind of person you want to hate, but can't because she's just so darn nice.
It was about this time in my musings about Muses that I realized I have more in common with my literary hero, F. Scott Fitzgerald, than I ever imagined. Good old Scott once said: "Writers aren't exactly people … they're a whole lot of people trying to be one person."
And there you have it. A Muse is really nothing more than schizophrenia put to good use.
Click here to let us know how the muse inspires you. If you are a clinical psychiatric professional, don't worry, I'm mostly harmless. If you want proof, you can check out my much more grounded post on the Chicago Moms Blog called Set Summer Free.
Photo credit: The Muse by Evil Patrick Shannon
Posted by Susan Bearman at 7:27 PM 11 comments:

Summer's almost here. And even though the Chicago weather is playing hide and seek with the calendar, it's only a couple of weeks until we dip our toes into the first holiday of the season.

When I was a kid, summer meant one thing: freedom. Freedom from school and schedules, from musts and have tos and right nows. Summer meant playing outside until dark and being able to roam as far from home as we could get, as long as we could still hear our mom call us from the front porch. When I got a little older, summer meant the freedom of riding our bikes to the park for swimming lessons and staying there all day. My mom brought us a picnic lunch and stayed until dinner, when my dad came to play and swim with us until dark.

But for this generation of children, the freedom of summer has been sold into bondage. The hectic schedule of the school year has already sent its bounty hunters ahead to lay claim to those formerly lazy days. Whole hours and days and weeks have been enslaved by day camps and sleep-away camps, art and music and dance classes, tutoring and swimming lessons. And while I'm sure all these opportunities do provide enrichment, I can't help but think they are also stealing something important from our children.

Shortly after I got married, my 12-year-old stepson spent a week or two with us in the summer. He brought some things to do, but eventually told me he was bored. I said to him what my mother had always said to my brother and me when in that situation: "Why don't you go outside and play?" He looked at me blankly and said: "What do you mean?" Let's see, I thought, "Go outside" — that's pretty clear; "and play" — that seemed pretty straightforward, too. I remember feeling profoundly sad that he had no idea how to entertain himself, even for a brief time, on a beautiful summer day.

By the time I started having my own children a year later, I learned that summer had turned into a world of preplanned, preprogrammed, prepaid, adult-led activities.

My mom didn't drive us all over town for play dates; we played with the kids who lived nearby. She didn't feel the need to register us for every sport and camp. We did one or two things with adults in charge, but mostly we played sandlot baseball and pickup games of Red Rover with the kids in the neighborhood. When we chose our own captains and teams, we learned leadership skills. When we agreed on the rules, we learned to the art of cooperation and team building. Believe me, I'm not romanticizing my youth — I was the last one chosen as often as not, and frequently felt bullied and left out. But I learned things from those experiences and feelings, too.

It's true that I remember reaching a state of profound boredom during the summer, but it didn't happen for weeks and weeks. In addition to stimulating our imaginations and making us responsible for entertaining ourselves, the onset of boredom had the added benefit of actually making us look forward to school. My kids often feel like school has barely ended before it starts up again.

I love summer. I like spending time with my kids. While they have had their fair share of summer camps and activities, I have refused to surrender every minute (and every dollar) of our summer to regularly-scheduled programs. The downside of this, of course, is that even though my kids have had time to play, most of their friends have not been around.

I harbor a secret hope that things may be a little simpler in this summer of recession. I say set summer free! Let's take this opportunity to reclaim some sweet summer independence so we can all get good and bored together. But check back with me in early August. My ideas of summer freedom may feel like a life sentence by then, and I'll probably be singing the jailhouse blues.

This is an original Chicago Moms Blog post. Susan can be found blogging year round at Two Kinds of People and The Animal Store Blog.
Posted by Susan Bearman at 5:41 PM 1 comment: