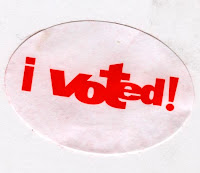 The political discourse surrounding this election has also encouraged me — at least the discourse in our household. My children have raised many important questions on vital issues, including: What is the difference between an opponent and an enemy? Can we solve the energy crisis and protect/cleanup the environment? Why haven't we ever elected a woman or an African American or a Jewish American to be President or Vice President? Can I push the buttons on the touch screen?

It's been a long haul. I strongly believe political campaigns and wedding engagements should be limited to no more than a year. But, it's finally here, and maybe even my political junkie brother will sleep better at night. The one thing I want to remind my children about on this historic day is that the election is not the end: it's a new beginning.

This an original Chicago Moms Blog post. When not standing in line at her local polling place, Susan can be found blogging at Two Kinds of People and The Animal Store Blog.
Posted by Susan Bearman at 10:53 PM

I feel this deserves applause. *Claps*

Very good! And you even get a sticker for your efforts. Can *I* press the buttons on the touch screen?

Yeah! Good for you! And good for me and everyone who got out there to vote! My babysitter heard a radio guy say, "What's spending two hours in line when it means the next four years of your life?"

Here's what I don't get. The Trib says voter turnout was projected at 65% - a huge increase this year. What are the other 35% doing?

My son's kindergarten class did their own election, and McCain won. What? In Illinois?
Reasons given included: "He looks like my grandpa" and "My dad has the same tie".
If only I could be sure that adult voters had better reasoning!

Feel better, STL Mom, as my son's middle school all went for Obama here in Illinois. But, Oh, no, the first state was just colored in on NPRs live election map and it's red! (Kentucky)

My friend's daughter voted at school (in MI), too. She voted for Obama because she "liked the sound of his name." Isn't it wonderful our children won't have to grow up with some of the current prejudice against someone with a "foreign sounding name"?