Not Quite Published, Not Quite Famous 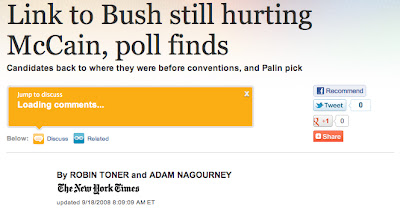 In the last 30 days, the pages of the venerable Times, which has been reporting the news in this country daily since 1851, of course covered both Barack Obama and John McCain in this historic 2008 Presidential campaign, Treasury Secretary Henry Paulson as he wades through the muck of the current financial crisis, and the loss of Hollywood great Paul Newman. Regular readers have also been treated to the musings of the gifted Dick Cavett in his NY Times blog called Talk Show; would have seen 30 references to, quotes from and clips of Jon Stewart of the Daily Show; and would have found, disturbingly, 10 mentions of 15-year-old Miley Cyrus.

But discerning readers, those who pore over every word of what may arguably be the most famous newspaper in the world, may have seen another name, one that has never graced those pages before — mine. No, they didn't publish one of my blog posts. No, it wasn't a review of my yet to be published first novel. No, I didn't get my first major newspaper byline. It was a quote, and a relatively boring quote at that, about the election.

It all started several weeks ago, when I got a call to participate in a "nation-wide poll." I've lost my patience for people who invade my home via the telephone, but something about the pitch intrigued me and I stayed on the line. It turns out that I was one of 1,133 people polled by New York Times/CBS News Polls about the election. I spent about 45 minutes on the first call, and another 15 or 20 minutes on a separate follow-up call a couple of days later. Two articles resulted from that poll: the important one (i.e., the one that has my quote in paragraph 15 and which, ironically, is on the MSNBC Website, not the CBS News or NYT Websites) entitled Link to Bush still hurting McCain, poll finds; and the other one, McCain Seen as Less Likely to Bring Change, Poll Finds.

It was a fascinating process, listening to the questions and how they were posed. Some of the questions were open-ended, like "Regardless of how you intend to vote, what do you like most about Sarah Palin?" I said I thought she was good at reading a teleprompter. In looking over the poll results, my answer must have fallen into the "other" category.

In both cases, I answered that the chronological age of these candidates was the least of my worries and that I didn't want to choose either answer, which put me among the four percent in the DK (don't know) category for these two questions. I do know, I just thought those were stupid choices.

Now, if they had asked something like "Given the two people the candidates picked as running mates, who would you be most afraid of dying in office, McCain or Obama?" — that is a question I could answer. Unfortunately, it was not one of the questions.

The follow up interview gave me a little more wiggle room to answer questions directly, rather than just picking A, B or C. I tried to be honest and not sound like an idiot. Both interviewers asked if they could use my name, age and hometown, and I agreed. I think if you are going to give an opinion, you should be willing to stand by it and be identified. One of them asked if I would be willing to be interviewed on camera. This is where I had to draw the line. Rumor has it that the camera adds 10 pounds, and I just can't afford that right now.

At the end of the second conversation, the interviewer asked me, off the record, what kind of work I do. I said that I was a writer. "Ah, that explains it," she said. Explains what? Why I was so snarky and opinionated? Why my answers took off like runaway trains? What, woman, what? I waited uneasily for her to continue. "You are very articulate," she said. "Most people just ramble on and and on and talk in circles. You made your point clearly and moved on." Those editorial comments, unfortunately, did not make it into the article. But at least they spelled my name right.

"Reading the teleprompter"!! Oh so funny!!

Independent? Yeah, like me - independent because those darn democrats are too conservative, right?

I grow nostalgic at the mention of newspapers. I used to work for one.
===================
Detectives Beyond Borders
"Because Murder Is More Fun Away From Home"
http://detectivesbeyondborders.blogspot.com/

The Philadelphia Inquirer.
===================
Detectives Beyond Borders
"Because Murder Is More Fun Away From Home"
http://detectivesbeyondborders.blogspot.com/