Just hair? I think not.

There are two kinds of people in the world: long-hair people and short-hair people.

The dictionary defines hair as the cylindrical, keratinized, often pigmented filaments characteristically growing from the epidermis of a mammal. Short-hair people have an even simpler definition: it's just hair. To them, getting a haircut is a non-event. "It'll grow," says my best short-hair friend.


Long-hair people, on the other hand, agonize over every cut. Some go for years without getting near a pair of scissors. To them, hair is a statement — a significant part of their identity. 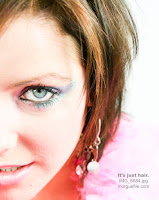 I have a dear friend (a longhair) who, for reasons still unclear more than 30 years later, cut off her long brown hair right after she got married. Post-honeymoon, she and her new husband moved from Ann Arbor, Michigan to West Lafayette, Indiana. For the entire car ride (396 miles) she cried to her groom: "I don't know what I was thinking. I'm going to meet all these new people and they're going to think I'm a short-hair person, but I'm not a short-hair person, I'm a long-hair person."

Needless to say, she grew her hair back and she is, to this day, a longhair.

In general, men don't understand the whole hair issue. By the time they pass through puberty, most are happy if they still have hair. There are exceptions, of course. My middle son is a beautiful towhead with big, irresistible, loopy curls, and he is extraordinarily vain about his hair. Complete strangers ogle it, covet it, even touch it. When we registered him for kindergarten, two women were admiring his beauty in general and his hair in particular. "Have you ever seen such eyes?" one asked. "No, it's the hair," replied her companion. My son shrugged and said (without an ounce of humility): "It's always the hair!" When I am finally able to corner him for a haircut, he always warns me not to cut off the curls.

Though I have taken my hair short (even short short) a few times in my life, I am a longhair at heart, and I must take exception to the short hairs' simplistic point of view. Do you think Boticelli thought it was "just hair" when he painted the Birth of Venus? How about O. Henry in the Gift of the Magi or the Brothers Grimm in Rapunzel? Oh, sure, the short hairs have Twiggy and Mia Farrow's Rosemary, but that's hardly great art.

Longhairs have had their pop culture moments, too (remember Broadway's Hair?) Even PT Barnum couldn't resist the long-haired lure of the Seven Sutherland Sisters, whose famous tresses totaled more than 35 feet. (Click here to see their amazing picture.) Locks of Love would have adored them.

I have reached the stage in life where, in addition to agonizing over whether to stay long or go short, I must soon decide whether to dye or not to dye. I admit I have had a few fantasies about becoming this really funky old lady with short spiky grey hair and a couple of really long, colorful hair wraps.  Will I ever be audacious enough to walk into a salon and say: "Cut it all off?" I tend to doubt it. To me it will never be "just hair".

I'm definitely a long-hair person - I agonized for months before finally donating to Locks of Love last year! I am now patiently waiting for my hair to get back to "normal." =)

There's a movie about the designer Coco Chanel with a great scene where she cuts her long beautiful hair in sorrow over a lost love.

I guess I'm a longhair, because I rarely have it short (I look like a boy), but I will cut it to chin length on the theory that it will grow, and sometimes you just need a change. Now, is one of those times - I'm dying for a cut and colour.

I'm a short-hair person, and while I agree with the "it's just hair" because it will grow back, I don't agree that short-hair is not a statement. It's very much a statement that, for me, says I like to have fun with my hair. I like to change it up. I like my hair routine to be simple and easy and yet still look like I care about my appearance. It's a different statement, but it has meaning none the less.

Hi, Olivia. Thanks for you comment. I did not mean to imply that short hair people don't think their hair makes a statement. In fact, just the opposite. Most of my short-hair friends love to play with their hair — different styles, different colors, different statements.

My mother-in-law once told me (a longhair) that people who wear their hair long are just plain lazy, don't bother to keep up their appearance and have no sense of style. i don't agree with that assessment, either. My own hair is quite curly (and gets curlier the shorter it gets) so keeping it long does require less fuss, but I don't think that means I'm lazy about it.

As I said, two kinds of people.