Ed. note: Results are in for the Second Annual Two Kinds of People Writing Challenge. 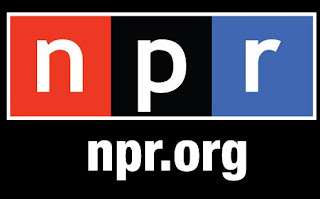 fan (noun) — an enthusiastic devotee, follower, or admirer of a sport, pastime, celebrity, etc. (origin: 1885-90, Americanism; short for fanatic or, some say, fancy)
fanatic (noun) — a person with an extreme and uncritical enthusiasm or zeal, as in religion or politics. (origin: 1515-25, "insane person" from L. fanaticus, "mad, enthusiastic, inspired by god", originally pertaining to a temple, from L. fanum.
_________________
There are two kinds of people in the world: those who listen to commercial radio and those who listen to public radio.

When I was a kid in the Detroit area, my parents listened to WJR, an AM radio station devoted to news, talk and sports. I hated it. I begged them to listen to music — any kind of music — rather than the blah, blah, blah of broadcasters like J.P. McCarthy. Now it isn't just because of the commercials that I tune out to commercial radio.

I first learned about public radio in college, via my friend Betsy Rippner, but I didn't become a fan until I moved to Chicago and found WBEZ; and I didn't become a fanatic until I became a mininvan mom and the information, news and intelligent conversation provided a potent antacid to a steady diet of Barney and other syrupy-sweet children's programming.

I started slowly, with the lovely works of Selected Shorts (where I finally came to appreciate the short story) and the unexpected FreshAir interviews by the always-curious Terry Gross (who still sounds like a very smart, young undergrad, even though she is now 60ish). My flirtation turned quickly to addiction and obsession, and I lapped it all up: Morning Edition, All Things Considered, and Talk of the Nation; as well as great locally produced programs like Worldview and Eight-Forty-Eight. I love the silliness of Car Talk, the aural truffles of Re:Sound, and the digestible nature of Science Friday.

And the names. I love the names of public radio: Cokie Roberts, Ira Flatow, Marion McPartland, David Folkenflik, John Ydstie, Nina Totenberg, Heidi Goldfein (who always pronounces every syllable of the letter W), Ira Glass, and Garrison Keillor (whose real name is Gary Edward Keillor, which isn't nearly as good). I revel in sonorous tones of "This is Bob Edwards"; and the distinctive inflections of "I'm Neal Conan", just two of the great voices of this old, yet still relevant medium.

I love the quirky traditions, like Jerome McDonnell's professed love of pledge drives; or the way you know the daily economic outlook by which theme song MarketPlace plays while "doing the numbers" — "We're in the Money" or "Stormy Weather" tell us almost all we need to know. I even tried Susan Stamberg's mother-in-law's Pepto Bismol pink cranberry relish recipe this past Thanksgiving (pretty good, if you like horseradish).

One way you know you have crossed the line from fan to fanatic is when your 12-year-old son downloads 15 podcasts of Wait, Wait, Don't Tell Me for a family road trip. It turns out, though, that family inculcation is not that unusual for NPR listeners. In a great new volume chronicling public radio history called This is NPR: The First Forty Years, Cokie Roberts writes about why she keeps getting up at five a.m. every Monday for Morning Edition:


"Because of the listeners. If you want to be heard by young people, farmers, the chief executives of the Fortune 500, members of Congress, players in the media, and especially moms, NPR's the place for you. Those of us who have been around for a long time constantly have the experience of some young—or not so young—person coming up to us and saying, "I grew up listening to you." And we always joke: 'Your mother made you listen in the car, didn't she?' Somewhat to their embarrassment, they admit it's true."

It is true. My kids have grown up listening to NPR. It has sparked great discussions about everything from the history of mustard (heard on a Wisconsin public radio station in the middle of the night) to the second Iraq war, which started when my middle son was 6 (he is now 14). His question then: "How can we go to war with Iraq?" At least that's what I heard. I tried to explain, but failed miserably. "Mom, what are you talking about? How can we be at war? 'A rock' just sits there unless you throw it at someone." Which pretty much sums up my feelings about our invasion of that country.

Some people like their weather and traffic on the ones. Others prefer to tune in to polarizing pundits on the left or the right. Still others (my husband) go for Howard Stern or one of the other shock jocks. If my kids want music, they can always plug in their earbuds, but even when they complain, I know they really want me to win Carl Kassell's voice on our home answering machine.

Me, I'm an NPR fanatic. I learn something new every day. I laugh, I cry, I get mad at the people with whom I disagree, because NPR presents many sides of a story. My thirst for knowledge is both fed and stimulated—often simultaneously. I'm guilty of putting extra greenhouse gases into the atmosphere as I sit in my running car listening to the end of a story. And I'm embarrassed to say I haven't pledged as much as I should. But I swear, the minute my first book is published, I'm going to become a dollar-a-day member.

Do you have a favorite NPR program or personality? Or do you hang out more in the middle of the dial. Please feel free to comment here.
Posted by Susan Bearman at 8:39 PM

Fanatic! Fan-at-ic! I don't have the time to tell you in so many words who or what I love on NPR and, in my case, WPR because I'm not going to write a blog post on your blog post, but know this, Susan Bearman, Ain't NOBODY going to take my NPR a-way. Hugs and kisses.

I'm with ya, sister.

Fanatic. Totally.
NPR is how I got my idea for my internment camp book - an interview with a musician whose band formed in one of the camps, "because they didn't have anything else to do."
I only turn it off during the pledge drives and if they are republican bashing (well, not bashing really, maybe needling is a better word).
Favorite show: Car talk!
:)
Bev

I also am a NPR fanatic. It's where I learn things as well as get the news. There are so many reporters that I follow there, but the one that stands out the most for me is Scott Simon. His recent piece on George Washington was so good. I actually went to the site to listen to it again!

All I can say is...Syl-vi-a Pogg-io-li...and the wonderful way she says her name with her deep voice and slight Italian accent! My parents listened to NPR often when I was growing up and it as shaped the way I view the world today. A big fan here.