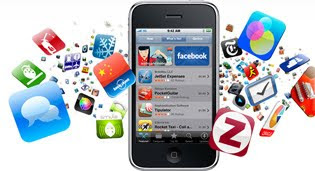 Disclaimer — I do not now nor have I ever worked for Apple, and they haven't paid me in goods or dollars for this post (although I'm open to negotiation).

Last month, my twins turned 18. I'm still in deep denial over what is clearly a blip in the time-space continuum. I know for a fact that it was just a few days ago when we were huddled around their isolettes in the NICU, watching in awe as their tiny 24-week bodies struggled to survive. And now … well, I just can't go there yet.

We have been so blessed, so lucky. Their delays, while significant, were just that — delays. They are both fully-functioning, healthy, happy (adult?) human beings, enjoying their senior year in high school and starting to think about the future. My daughter has taken the wheel on her road to life and is well on her way to independence. Her brother, who has had more physical and learning issues, still has a way to go.

For their 18th birthday, we got them each iPhones. During such difficult economic times, it's reasonable to ask why would we spring for such a hot, trendy, extravagant gift as an iPhone. That, I can tell you in two words — assistive technology.

The lingering issues that continue to affect my son as a result of his extreme prematurity are:

I have long believed that my son was lucky to be born when he was — that technology would be his friend. I still believe that, but there have been some bumps along the way: an addiction to video games and losing three (count them, three) cell phones his freshman year. During the few days he managed to hold on to his cell phone, he never remembered to turn it on, so I couldn't reach him any way.

Then, last year, he used his birthday money to buy himself an iPod Nano. Miracle of miracles, he did not lose it. He kept it turned off during school, but remembered to turn it on after school so he could listen on his way home. About a month ago, we had a meeting with his assistive technology specialist at school. A long-time PC person, she recently got an iPhone and is tremendously excited about the potential it holds for many of her students.

Assistive technology runs the gamut from wheelchairs to customized computers that allow quadriplegics to communicate with eye blinks. The field is exploding, but much of it is hugely expensive. While the initial outlay for the iPhone (about $200 for the middle-range iPhone) isn't too bad, the $30 monthly bite per phone for the data package adds up fast. We learned, however, that unlike computer programs, iPhone apps are pretty inexpensive (often free), and there are new ones every day. While there are many PDAs out there, the iPhone offered some distinct advantages, first and foremost the fact that it would be my son's new iPod, so we were pretty sure he would hold on to it.

It's fairly obvious how the calendar and organizational apps could help someone with short-term memory problems, but the iPhone apps offer much more than simple datebook functionality. For example, there's an app called VoCal that allows my son to record a voice message on his phone, which then translates into a written calendar reminder.

And it works! Our first iPhone success came after a missed orthodontist appointment one Friday. That night, he added the orthodontist's phone number to his contacts and entered a voice reminder into his phone. That entry sent him an alert after school on Monday to call the orthodontist for a new appointment. My son gets out of school at 3:35. By the time I called him at 3:45, he had already made the new appointment and entered it onto the calendar, which automatically sent an email to me so I could put it on the family calendar. That may sound like a small thing, but it was one giant leap toward independence for him and peace of mind for me.

That ability to recognize voice commands is a huge advantage for a kid with graphomotor issues. The sensitive microphone allows him to use his voice in a variety of ways, bypassing the need to write (and even draw). For example, there is an app called Omni Note. Say his horticulture teacher draws a picture of a plant cell on the board and tells the class to copy it for a quiz on Monday. This would be extremely difficult for my son to do, and the end result would not look anything like the original.

With the Omni Note app on the iPhone, my son could take a picture of the diagram, draw directly on that picture, add a typed and/or voice message to the picture and send it immediately to his computer at home so he could study it over the weekend. How cool is that?

His teachers are also on board, allowing him to keep his iPhone out and on throughout the day. He doesn't text and we haven't given out his phone number, so there is no risk of interruption during class. As part of his sequencing disorder, he has trouble organizing his thoughts into a coherent structure in school papers. One of his English teachers had the brilliant idea of having him research new apps and, as an assignment for class, write out the directions on how to use it (a great sequencing and organizational exercise), and include a paragraph or two about how he, personally, is using the app (a good way to practice his analytical skills).

Right now, our district would have provided him with an iPod Touch, which has some, but not nearly all the functions of the iPhone. The integrated microphone of the iPhone is a big part of the functionality my son needs to make this tool work for him, so we opted to make a family investment.

I understand that this is new technology, which is often scary and expensive for schools to contemplate, but I urge educators to jump on this bandwagon early. The potential of the iPhone for special needs students is vast and untapped, and this generation of students is already immersed in technology. This seems to me to represent the best that technology has to offer — a chance for students to overcome (even bypass) their disabilities and get right to the good stuff — the learning.

How did we justify making the same investment for our daughter? We told her it was because it would be a good tool for her at college next year, and it will be, but really, this is just one of those times when she should be darn grateful for her twin brother.

This is an original Chicago Moms Blog post. When Susan isn't busy trying to figure out how such a young mom can have such old children, she can be found writing at Two Kinds of People and The Animal Store Blog.
Posted by Susan Bearman at 12:49 AM

I love technology stories like this one. My friend's son has a huge sensitivity to pencils and pens and basically cannot write. He's in the gifted program and the school provided him a laptop in middle school so that he could do all of his writing on that.

Hi, I'm very interested in posts like this. My son with mosaic Down syndrome (almost five) already loves technology. He is bright, but has fine motor issues. Given his propensity to steal our iPhones, I just know he'd love his own. Thanks for the post. (Saw the link on She Writes.)

Great essay in the Atlantic on how one blind person has come to love the iPhone.

While my son is dysgraphic his weaknesses are also with attention (his memory is actually incredible) - and he too has lost countless cell phones. I remember having arguments with his sixth grade math teacher.

This teacher would put twenty math problems on one page, and required the kids to copy the problems on the back of the page or on attached pages. My son's 3's became 8's, 4's became 9's and I argued that as a result, the teacher was not testing my son's math skills but his copying ability - because the math answer was inevitably wrong because the numbers kept morphing.

Thank you for visiting my blog and leaving your comment. I appreciated and would like to address dysgrphia - using your comment as a prompt - with your permission.

Meryl — thanks for your comment and your post on handwriting. We have had wonderful teachers along the way who have helped my son tremendously. We have had a few who did not get it. One teacher once said of my son's short-term memory deficit: "I keep forgetting that he can't remember."

It was difficult to get the point across that while he could understand everything, he couldn't access the information once the connection had been broken. For example, he can repeat directions back verbatim, but can't remember them five minutes later, especially if he has moved to a different venue (e.g., from school to home).

The graphomotor issues continue to be problematic, but the more he learns to rely on technology, the better. Technology is improving and, more importantly, becoming more and more acceptable in school. It's taken a long time. When I was in middle school, we weren't even allowed to use calculators.