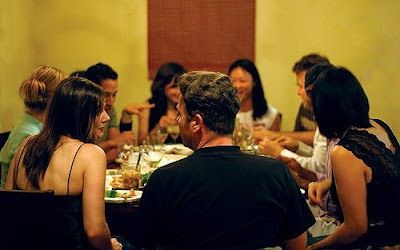 There are two kinds of people in the world: those who use online social networking tools and those who don't. Yet.
Social networking is exactly what it sounds like: communicating among a group of people with common interests — and it is not new. Plato's Academy, way back BCE, was a social network. The writers, editors, actors and agents who frequented the Algonquin Roundtable after WWI practically defined social networking. Heck, talking over the back fence with your neighbor an act of social networking.
So, what's all the fuss? Do we really need Twitter? Has LinkedIn changed the way we link up? Are people really being served by listserves?
Just as it has altered everything else it has touched, the Internet has changed the very nature of social networking — allowing people from all over the world to make instant connections. Sometimes these connections are nameless or pseudonymous, many times they are faceless. Some "require" you to post your real name and picture, but who's really checking the millions of users involved in these lawless social networks, often referred to as the wild west of the 21st century.
A few weeks ago, I ran across SheWrites, a brand spankin' new Web-based community of (primarily) women writers. I was attracted to the idea of a place online that was all about writing all the time. Since the site went live sometime mid-June, it has grown to more than 2,500 members. But Facebook boasts 100,000 times that amount, claiming to have 250 million members.
When I mentioned SheWrites in my last post, I heard from my friend Marcy, who said: "Why are you not on Facebook, woman? I just posted a link to your blog, you silly gal."
Why wasn't I on Facebook? Here was someone else promoting my blog on the world's largest social networking site, so why wasn't I? I guess it seemed a little crass — all those horror stories of people posting pictures of themselves in compromising positions and then losing their jobs over it. I guess it seemed a little scary — 250 million people! I guess it seemed like a black hole ready to suck even more of my time and creative writing juices (read this hysterical review).
But, as of July 14, Facebook can now boast 250,000,001, because I finally caved and joined. Facebook is the crack cocaine of social networking. Highly addictive, it sucks you in with the ability to make more friends in 10 minutes than you have in your entire life. With its online food fights and rounds of simulated drinks, if you're not careful, you could find yourself suffering one wicked virtual hangover.
On the other hand, you can talk to people you never see or hear from except around the holidays. You can reconnect, promote your business and (one day) your book, and even learn a thing or two. You aren't promising your life away by posting a few lines here and there. When you're done, you're done. You don't have to comment. You don't have to post your status. You don't have to check your wall. (Well, maybe you don't have to check your wall … hang on, I'll be right back.)
The cure for boredom is curiosity.
There is no cure for curiosity.
— Dorothy Parker (1893 - 1967)
Ok, I'm back. With the passing of Walter Cronkite, I have been thinking a lot about the new media. Is this instant communication anything more than curiosity run amok — our escalating narcissism and voyeurism spun into the ultimate exercise in navel gazing? Is unedited, unvetted, user-generated content the literature of our time? Is this how our words will be judged?
In a well-crafted post, Merlin Mann argues that we need to do better:  "What worries me are the consequences of a diet comprised mostly of fake-connectedness, make believe insight, and unedited first drafts of everything. I think it's making us small … All I know right now is that I want to do all of it better."
Here's to doing better. I hope you'll keep me on my toes here at Two Kinds of People. Use your right to comment and call me on typos, spurious arguments and run-on sentences. All you have to do is click here.
Photo credit: Circle of friends by Frederic Poirot
Posted by Susan Bearman at 12:16 AM

What's the deal with sumwrites, or whatever that is?

Hey, Linda. SumWriting is a tutoring blog I am doing with three high school girls this summer. I post ideas, writing concepts and exercises; they post their responses. It's been blast, at least for me, and they seem quite engaged.

The advantage of tutoring via a blog is that we don't have to meet in person (after the first time). Two of these students are spending much of their time in Michigan this summer, but we can work together long distance. We don't even need to do it at the same time.

"The internet is one big vacuum ..cleaner. Someday we will all wake up in a bag of trash, but at least we will all "know" one another."
Crazy Horse 2009

I finally did it! Now we'll see if I did it right.

Enjoyed the piece - still not on Facebook and don't plan to be.

Facebook to me is more a friends and family than a real networking site. I have no professional contacts on that site.

LinkedIn has given contacts with those in my area who write and that is great, but it has not given me contact with employers - yet.

Any site is what you put into it in my opinion. I don't like to play games since I am here to find a home for my writing. (Though I have to find time to play on FB to keep connected with nieces and nephews! It is a social place after all!)

As interesting as it may be, as a retired person, I just don't have time.
Mom

Didn't realize you JUST got on Facebook. I resisted too at first but have been AMAZED at the people who have found me from former lives. For some people it really is like crack cocaine. I don't water plants on Facebook or take the quizzes on which cartoon fits my personality but it's such an amazingly convenient way to keep up with friends. So far I"ve kept it personal---and apart from my "other" life--but like everything else, even that boundary is starting to get blurry.

Thanks to Molly for catching my typo. It's been corrected.

I haven't joined FB yet. I feel totally out of the loop. I don't Twitter, either. One of these days when I'm not in over my head in revisions, I'll maybe, perhaps try it.

Just catching up post vacation, loved my quote, go tipping points! Interesting comments, indeed FB is truly social for me. I use Linkedin for professional connections. AND, last month my employer started an internal social network, geeze louise, that's what I get for working for a giant computer company... I have to say FB has been really really good to me, prompted a trip to CT to see my college roomie who I had not seen since she came to my wedding in Wilmette 21 years ago. And that trip was the best darn 50 year bday gift either of us could have imagined :) Marcy