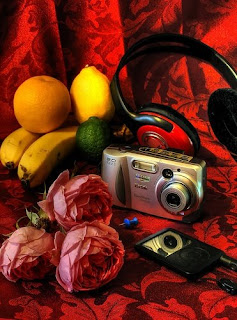 "Don't tell me the moon is shining; show me the glint of light on the broken glass."

There are two kinds of people in the world: those who are visual thinkers and those who are not.
As writers, we are taught to use all our senses to describe the worlds we create. Show, don't tell. Readers want to see, hear, smell, taste and touch everything our characters experience, but how do we convey those rich sensory details with mere words?
In early critiques of the manuscript for my children's novel, readers commented that they liked my main character, but couldn't see him. I knew everything about this third grader — his thoughts, feelings, friends, passions, parents, siblings, and even his pet — but I had no idea what he looked like.
In my mind, he was an average-sized third grade boy with a pixellated face, like the blurred mugs of the world's dumbest criminals in those reality cop shows. But my readers would fill in the visage that I couldn't envision, right? Wrong. "What does he look like?" one young reader asked. Good question.
We live in a visual world and the human eye is an astounding organ, processing up to 36,000 bits of information per hour and nearly 24 million images in a normal lifetime. We see as many 10 million colors and can distinguish 500 different shades of gray.  (On the other hand, the octopus does not have a blind spot, so maybe we should leave parallel parking to the cephalopods.)
But among humans, some of us are more visually oriented than others. I've started carrying my camera around to train my eye to capture visual details and then translate them to the written page. To keep from becoming distracted, I've focused mainly on color and have been pleased enough with my amateur efforts to have a little flickr set on the subject. Just when I was feeling good about these optical exercises, I clicked on a link to my friend Matt Dinnerstein's magnificent professional photos and was vividly reminded that my visual skills are rudimentary at best.
Time for a new exercise. I stand in awe of visual artists, and thought maybe I could borrow some of their work to help me "see" my character. One of the instructors at Off Campus Writers Workshop advised us to "create a visual map — a poster with images of our characters and settings," so I took to perusing magazines. I tried, I really did, to find a photograph that would bring my character to life, but instead of pictures, I found myself cutting out descriptive words in interesting fonts.
That's when I realized that I'm not a visual thinker. I rely on a sixth sense — my sense of language — to interpret my world. It all comes down to the meaning, rhythm, subtext, context and order of the words — and there is nothing "mere" about them.
The roughly quarter million distinct words of the English language can be combined and recombined to create meaning, nuance, irony, description, poetry, humor, tragedy, drama, fantasy, romance … in other words, all the sights, sounds, scents, tastes and feelings our physical, emotional and imaginary worlds can generate.
I recently sat down and removed the mask that was hiding my main character so I could take a good, long look at him. Turns out he's a real person after all, and it only took a couple dozen words to paint his picture:
Well, can you see him? Click here to let me know what's missing, or to discuss which sense you count on most navigate your world.
_________
Ed. Note: 6/5/09 8:18 p.m. — I just found these great tidbits in some correspondence between F. Scott Fitzgerald and his editor, Max Perkins, on an early draft of The Great Gatsby.  Perkins wrote:
"Among a set of characters marvelously palpable and vital — I would know Tom Buchanan if I met him on the street and would avoid him — Gatsby is somewhat vague. The reader's eyes can never quite focus upon him, his outlines are dim."
After first claiming the vagueness was intentional, Fitzgerald responded:
"I myself didn't know what Gatsby looked like or was engaged in and you felt it."
It's nice to know that my initial vagueness about my main character puts me in good company. Read more about this fascinating relationship between author and editor here.
Photo credit: The Five Senses by Rob Nunn aka scalespeeder.
Posted by Susan Bearman at 8:26 PM

As always, fun reading. And I loved the pictures, both yours and Matt's. What about your third-grader's body, other than his fingers? Is he tall? Skinny?

I didn't know you had written a children's novel! That's great!

Great post, Susan. I use language to interpret my world as well - but I integrate that with my other senses of course. When I'm writing I often close my eyes (I touch type) and see, smell, hear what is in my head so I can translate to words. I always search for the perfect words, phrases and terminology.

I love your description of your main character. Hooded eyes was my favorite, and is the most unusual physical characteristic to me, so telling of a face that is distinct yet not strange - ordinary yet special.

Since novels are always strewn with dialogue, I'd love to know what his voice sounds like so I can hear it in my head.

I looked at Matt's pictures. They're pretty awesome. :)

I loved the picture at the top. And the post. It was very inSIGHTful. Get it? Sort of? Well, I thought it was amusing. Good post. I always liked Ian, and I like that he now has freckels.

That 3rd-grader is coming to life! I have trouble remembering to include sensory details, like texture, smell, appearance, so hearing about your process was helpful to me.

Thanks for your comments.

Amy Sue — I'm an accomplished touch typist myself, but have never tried to type/write with my eyes closed. I'll have to give it a shot.

Amy Sue and Linda, here is a bit more description of my character, Ian. In terms of size, I wrote:

You should know that Ian loves magic tricks, but hates spelling. He's not a big talker, unless the subject is magic and then his mouth runs at a mile a minute. Here's a snippet of dialogue between Ian and his little brother Brian:

“What does your sign say?” asked Brian, Ian’s little brother. At just five years old, Brian could only read a few words.

“It says: ‘Ian the Great!’” said Ian proudly. Standing back to take a good look at his poster, he scratched his head through his wavy, chocolate-brown hair. “It’s my new stage name.”

“I thought you were going to be ‘Ian the Magnifier,’” said Brian.

“Magnificent,” said Ian. “No, ‘Ian the Great’ is better.” He stood his sign up against the dining room wall and stepped back again to admire his handiwork. “It’s shorter, easier to remember, you know?”

“It’s not the name of a great magician,” Ian replied. “It’s not even a first name and a last name — it’s just two first names. Now Houdini, that was a great name for a magician. Did you know that ‘Harry Houdini’ was a stage name? His real name was Ehrich Weiss. Nobody knows Ehrich Weiss, but everybody knows Houdini. Someday, people all over the world will know the name ‘Ian the Great,’ just like they know Houdini, and Penn and Teller.”

“What’s a penteller?” Brian asked trying to keep up with Ian, who was always so excited when he talked about magic that his mouth sped ahead like a runaway train. …

How do those hooded eyes take in his world?

Nice article, thanks for using my photo!

I loved learning about the octopus' incredible eye (yes-let him parallel park!), the official word for those blurry squares on people's faces, and the number of words in the English language -- this is such a 'value-added' post! I especially love the fact that you're sharing your process. You paint a very clear picture with words - explaining how difficult it can be to paint a very clear picture with words. It's so cool to see wavy-haired, freckle-faced, blue-eyed Ian taking shape and stepping out from that.

You're little guy has come to life for me. This made great reading. I also liked the tidbit about Fitzgerald. He's one of my favorites, as is Hemingway. There's a great book on their relationship and correspondence, Fitzgerald and Hemingway: A Dangerous Friendship.