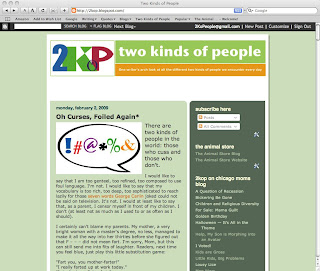 There are two kinds of people in the world: those who blog and those who don't.
It's been about a year since my inaugural post here on Two Kinds of People. I claimed then that my primary reason for starting a blog was to get help naming our new puppy, Hazel. Truth be told, I started blogging to learn, well, how to blog.
I've been a writer my entire adult life, and while I firmly believe that good writing will always be good writing, how and where we read and write is changing by the minute, shifting ever more quickly from the page to the screen. A recent study of online behavior found that consumers now spend more than twice as much time online as they do watching television, and eight times as much as they spend reading newspapers and magazines.
The way we communicate and our definition of community is transforming daily. We Twitter and Tweet and meet and greet in ways that weren't even dreamt of ten years ago. I haven't bought into it all (yet), but I love the instant gratification of blogging. There's no waiting for acceptance or rejection. It happens now. And if I were a control freak (which of course I'm not) I might be all aquiver over so much power — my words, my graphics, my layout, mine, mine, mine. (I am not a control freak. Stop saying that.)
The feedback is the best part. In case you didn't know, bloggers live for comments. (Leave a comment, dammit!) It's a conversation with friends and strangers from around the world. That little widget on my sidebar called Feedjit let's me see how and when readers arrive at my site. Someone recently visited from Cairo (Egypt, not Illinois). How cool is that? Another reader landed on my poetry post by doing a google search for the Coleridge quote I used.
I've met really interesting people — other bloggers, of course, but published writers, other moms, entrepreneurs and techies, as well. The women writing with me on the Chicago Moms Blog and the rest of The Silicon Valley Moms Group, have become a family of sisters, mentors and friends. The connections I've made have been fascinating, even though I've only met one person from the blogging world face-to-face. And I've even won some cool free stuff along the way.
It turns out the internet works like my brain (a scary concept, I know). It can take you in a straight line if you're in a hurry, or you can meander along interesting paths if you are a creative thinker.
My goal when I started was to learn, and I've learned a lot, including:
It seems like I learn something new every day, and that's exciting. With all this emphasis on the new, I thought after a year it was time to shake things, so I dropped the old standard blogger template and learned how to do a little online design. What do you think? I even learned how to create and embed a poll to see how you really feel about this new look.

Recent estimates set the number of blogs in the hundreds of millions. Thank you for taking the time to read mine. I'm having a blast. Keep reading and leave a comment (please) by clicking here. Then jump on over to the Chicago Moms Blog to see my latest post entitled Kids are Gross.

Wow, time flies! Happy Anniversary and love the new look! (Not that there was anything wrong with the old look!)

I like the new format, and am very impressed at your level of "geekiness"! Congrats!!

Hi, Sus! You said we had to comment, so I'm commenting!

Hope you get to meet Riley this weekend...

first, i loved your comment on my nerdiness post. talk about putting yourself out there and wondering what people will think! it took almost a full day for people to comment--that really made me nervous! but i think the bill gates quote is awesome.

second, i appreciate good writing and enjoyed reading this post. i have been thinking a lot about the nature of blogging. i still think it is weird but i enjoy it.

third, i love your new look. i definitely need to learn how to do something like that!

Your new look rocks! I am jealous of your mastery of certain bells and whistles, such as Feedjit and video. Keep it going, Susan!