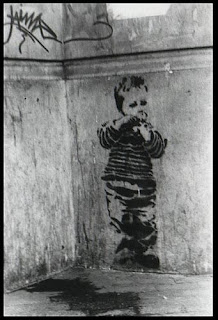 Until just a week ago, all my parenting experience as a mom and stepmom of six children (ranging in age from 29 to 10) has borne out the underlying truth of the old adage: "Little kids, little problems; big kids, big problems." Now I know that the problems of our little kids are big and getting bigger every day.

This week, our community was rocked by the news of the tragic loss of a fifth grade boy, who was found unresponsive in the bathroom at his public school and who later died, apparently of self-inflicted injuries. I cannot begin to comprehend the devastation the family* of this child is feeling and my heart breaks as they struggle with their pain and dispute even the possibility that he could have taken his own life.

While we do not know this family personally, the loss has had a profound effect on our family, particularly my own fifth grader, as it comes on the heels of a traumatic week for him. A week ago, he experienced his first encounter with verbal and physical bullying. The details are unimportant, but a few facts are worth mentioning. Though he felt threatened for several hours during the school day, my son never went to an adult for help. Though a number of other students in the fifth grade knew of the threats, they never went to an adult for help, either. When I asked my son why he didn't go to an adult, he said he was just scared. He was so scared, in fact, that he ran into the street without looking and was almost hit by a car.

I give credit to our school principal for the way he handled this incident. I think it was particularly insightful that he recognized and addressed the more global issues of keeping dangerous secrets. In speaking to the entire fifth grade, he explained the difference between tattling and going to an adult to keep someone safe. This can be a difficult concept for children to understand. You're not supposed to rat out your friends.

A few days later, in a completely unrelated conversation, my same 10-year-old boy told me that he has been feeling completely overwhelmed all school year and he has no idea how he is going to be able to handle the work and logistics of middle school. His 17-year-old sister smirked at the idea that his fifth-grade life is so hard. After all, she is having to take exams, and ACTs and SATs, and choose colleges, and pick a career, and make decisions that will affect the rest of her life. All he has is a little bit of homework.

It was tempting for me to smile at his worries, too. But I get it. As the youngest of six, this boy has a preternatural understanding of the fleeting nature of childhood. On the one hand, he sees clear-eyed what the future holds in store for him and that growing up is not necessarily all it's cracked up to be. On the other hand, he is holding on white-knuckled to what is left of his boyhood, trying to squeeze out every drop before the well runs dry.

And then we lost another fifth grade boy in our community. I knew when I heard it on the news that the rumors were probably already flying at my son's school. Fifth grade is all about gossip. I also knew that he was probably going to be very upset. We had a long talk that night. We talked about how sad we were for that other little boy and his family. We talked about living in the moment and trying not to worry too much about what's going to happen next. Mostly, we talked about the importance of talking. I reiterated how much we love him and helped him enumerate all the adults in his life he can trust and turn to whenever he needs them. I don't know if it comforted him. I hope it did.

There is no question that the stress our children face is increasing. My adult stepchildren are shocked at the amount of homework their youngest siblings are expected to do every night. When my high school juniors were in elementary school, they didn't even know when the standardized tests would be administered. Now, my little boys worry about them for weeks in advance. I can't help but wonder what else they worry about. I can't help but worry that we, the adults in their lives, are somehow failing them when they feel that they cannot come to us with their problems. Fifth graders should be thinking about books and video games and friendships and snacks and play dates and the myriad other exciting things that being 10 means. They should not be carrying the weight of the world. It's too heavy for those slender shoulders.

*The Oakton Elementary School PTA has set up a fund to help the family of Aquan Lewis. For more information, click

This is an original Chicago Moms Blog post. Susan also writes Two Kinds of People and The Animal Store Blog.

Photo credit: The Weight of the World by Jen via Creative Commons.
Posted by Susan Bearman at 7:48 PM

How incredibly sad. This awful scenario serves as a reminder that we need to do everything we can to teach empathy to our children so that they do not become the bully. We also need to teach coping skills to our children in case they do get bullied and the most important factor in developing those coping skills is having a secure and close relationship with their parents. It sounds like you are doing a wonderful job listening to and teaching your child.

There are lots of excellent anti-bullying resources here for any school or parent that is looking to deal with these types of situations.

I believe that the worst thing you've ever experienced is the worst thing you can imagine experiencing. It doesn't matter whether it's having someone steal at toy at the age of two, getting bullied at 10, dealing with heartbreak at 16, losing a job in your 20's, etc. Most of the problems we deal with are small in the great scheme of things, but they feel big. I think that as parents, we always need to keep that in mind. Our kids are just learning to cope with life challenges and so those "small" problems are huge for them. If they learn to deal now, they will be more capable of dealing later.

My heart goes out to that family.

Thanks for the reminder to help our kids remember to tell an adult when someone is scared or may get hurt.

I am always amazed how wonderful a writer your are. To put all "our" thoughts and everyday life on to "paper".

This is an incredibly sad story and hopefully a wakeup call that something is terribly wrong, and you've done a wonderful job identifying some of the underlying issues of the problem.

This is a tragedy. That poor little poor boy and his family and friends.

I taught middle school for seventeen years. It can be a brutal life transition for some children. Kudos to your son's principal. He sounds like the kind of educator that all children should have.