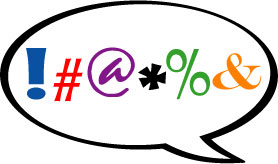 There are two kinds of people in the world: those who cuss and those who don't.

I certainly can't blame my parents. My mother, a very bright woman with a master's degree, no less, managed to make it all the way into her thirties before she figured out that F – – – did not mean fart. I'm sorry, Mom, but this can still send me into fits of laughter. Readers, next time you feel blue, just play this little substitution game:

"Fart you, you mother-farter!"
"I really farted up at work today."
"I don't give a flying fart."

See, don't you feel better? But I digress.

I am a woman of words and, like the late, great Mr. Carlin, I believe all words have meaning and validity and importance. I recognize that Lenny Bruce went to jail for the right to use "dirty" words in his routine. David Mamet has raised the use of the profanity to literary art, winning a Pulitzer Prize for his play Glengarry Glen Ross and dropping the F-bomb 128 times in the film version.

Choosing the right words is a delightful challenge for me and, when I find just the right one, it gives me profound pleasure. Sometimes, a particular four-letter word, or string of them, is the right choice. I'm not afraid of the deadly seven, or any other words for that matter. I'm just bored.

My grandmother used to say things like "Well, he certainly uses some colorful language." The trouble is, these words, particularly the F-word, have become so ubiquitous, so banal that they aren't colorful at all — they're beige.

The word "cuss", of course, is a bastardization of the word "curse", which literally means to wish harm upon or invoke evil upon someone or something. There was a time when we didn't rely on only seven little words to insult or damn someone. English has a rich history of cursing as an art form. You just can't beat some of the slings and arrows launched by Shakespeare's pen. How's this for calling someone a pig:

For Shakespeare, someone was never simply fat:

"She is spherical, like a globe. I could find out countries in her." — The Comedy of Errors

One of the only true "swears" in our house is "stupid". Shakespeare had better version of that one, as well:

"He has not so much brain as ear-wax." — Troilus and Cressida

Though the Bard's insults were brilliant and funny, he is not alone in his verbal prowess. Will Rogers, Mark Twain, Oscar Wilde, Dorothy Parker and H.L. Mencken are just a few who could hurl a high-brow insult at the drop of a hat. Even some of our most esteemed statesmen knew how to wield a wicked barb:

"He has all the virtues I dislike, and none of vices I admire." — Winston Churchill

"He can compress the most words into the smallest idea of any man I know." — Abraham Lincoln

At home, the language of 21st Century little boy insults is dragging me down. I'd like to inject a little of this literary fencing into our lives and, in an initial effort to upgrade our arguments, I propose the following:

"Shut up, you stupid butt-head" — shall henceforth be transformed to — "Silence, you ignorant hindquarters of a domesticated ungulate!"

"Get your paws of my freakin' stuff" — shall forevermore be — "Remove your rotted, germ-infested metacarpals ere I sever them below the humerus."

I think it can be done, and the benefits will be threefold:
Best of all, I will no longer be bored.

I also have to admit to having dropped my fair share of F-bombs during last week's Mop Wars. You can read all about them in my latest post on the Chicago Moms Blog by clicking here.

*With thanks to that articulate arch villain, Snidely Whiplash.

Posted by Susan Bearman at 4:56 PM

I also used to tell my students that using the same old curse words was a kind of sloppiness, since there were so many other more expressive ways of conveying your meaning.

Very funny and yet true to the point.

A few choice insults that still make me laugh…
A fiend of mine, while in line at some fast food restaurant witnessed two women arguing. One was working behind the counter, one was a customer. The customer screamed, "you bitch!". The other replied, "The bitch is in your image!". We still laugh about it.
Another incident comes to mind when my brother called me a bed wench! I finally learned how hard his head actually was when I broke my mother's turkey platter over it. There was no damage done, not even a bruise. He had gotten the insult from a book he was reading in class and thought it would be amusing to try it out on me. We still laugh about that one as well.

This is a great site...glad you visited so I could do the same..

I loved to swear most of my life and just recently began choosing better words and it feels great...

There are no words that are off-limits in the real world. Culturally, we decided the f-word was forbidden, so of course we find it explosive when used in social situations. We break a taboo and express anger all at the same time. A two-fer. The word itself is full of hard sounds. Like c-u-t - it sounds like what it is. Sometimes a situation is so egregious no other word will do.

On the other hand quick insults responded to quickly take skill. Shakespeare used words that reflected his love of language. They were thought out for plays and I doubt street folks knew the unabridged version of an insult - or a compliment - written by the Bard.

Most people nowadays barely read or even know about a variety of literature or philosophy or poetry. So how can language be other than a longer text message?

We hurry, we speak and write in shorthand so other more acceptable four letter words s***,d***, h*** and even f*** now and then come in handy - it sure saves time explaining how we feel.

This is my first visit...what a great idea for a blog! I love it! I guess there are two kinds of people in the world...those who read your blog, and those who don't. :)

Great post! I'm not anti-swearing at all and, like you, "stupid" gets a stronger reaction from me than a curse word. And I learned early that "shut up" is the biggest no-no word of all.