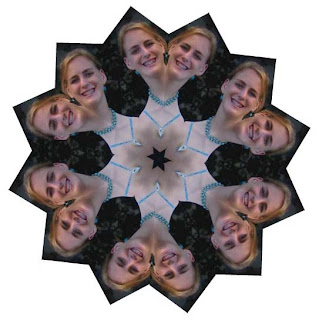 There are two kinds of people in the world. Or are there?

Some time ago, a fellow writer from Off Campus Writers' Workshop, Ruth Spiro, told us about a handy little tool called Google Alerts. (BTW, congrats to Ruth on the publication of her fabulous picture book, Lester Fizz, Bubble-Gum Artist.)

The Google Alerts utility allows you to enter a search term, then crawls the Web and sends you e-mail alerts anytime your topic or phrase shows up online. Ruth shared an anecdote about how she set up a Google Alert for her own name, and found out that a magazine had published a story she had submitted (more than a year before) without notifying her or providing appropriate remuneration. Ruth sent a charming letter to the publication, thanking them for publishing her story and including an invoice. They paid her! You can see, in an environment where writer's are being pilfered and plagiarized without being paid, setting up a Google Alert for your name and your work is a practical and vital tool.

Ruth also suggested that Google Alerts are a good way to help protect our children and their online reputations. Blogs, Facebook and Twitter represent just a few of the more well-known ways of social networking that are spreading online like herpes during spring break. Many people, especially young people, don't understand how important it is to protect their online identities, yet stories abound of lost opportunities due to an ill-considered blog post, an incriminating photo, or even a brief Facebook comment. Just today, there was a tragic story about a teenage girl who committed suicide because, after breaking up with her boyfriend, he sent a nude photo of her out over text messages, which resulted in crushing harassment.  This lovely pastime has now been dubbed "sexting". As my Dad says, we've come too far.

Not wanting my children to suffer these terrible consequences, I immediately set up Google Alerts for each of their names. (No, it's not spying, it's parenting. There's a difference. Hey, did I just hear you mumble "Patriot Act" under your breath. Clearly, you don't have teenagers.)

I started getting Google Alerts based on these search phrases and discovered that four of our six children have nominal twins. Our last name is not that unusual, but the spelling is relatively uncommon, so I was surprised at this duplication. Turns out our oldest boy at home (who really is a twin) has a name-twin in NY who is a fashion photographer. I actually had a brief, cool email correspondence with this talented young man. Our second youngest is related by name only to a jazz pianist. Our eldest, who works at Microsoft in Seattle, shares his name with a budget coordinator in Canada; and one of our girls has a name-twin in high school in Auburn, Washington.

This gave me a story idea and led me to Google all of our family names.  (No, it was not wasting time, it was research.  Don't you people know anything about writing?) All this information led me to start thinking about identity and individuality and a few other "i" words. When we are expecting a baby, most of us spend hours, days, weeks poring over baby name books, looking for just the right one that will reflect the person we hope he or she will become. You have to take so many things into consideration:
In the end, our children are who they are. They either love their names, or they hate them, and there's not a lot you can do about it.

Fiction writers, however, get to relive the joy and angst of naming people every time we create a new character. My daughter, who is doing a creative writing independent study, raises a lot of eyebrows as she peruses her baby name books in the high school cafeteria. Her teacher/mentor has been needling her for some new character names, and she came up with this gem: Iambic Pentameter, III. I wish I had thought of it.

In addition to name-twins, there is the common myth that we all have a physical lookalike somewhere in the world. My creative writer girl recently ran across the following video featuring a British musician named Geraldine Quinn.  My girl said: "This is what I'm going to look like in 10 years. This woman looks just like me. Smiles like me too."

While there are some striking similarities, with no offense to Ms. Quinn, my girl is much more beautiful. (This is a completely unbiased opinion.) In an interesting twist, when we did a Google image search for Geraldine Quinn, we found that her younger pictures look significantly less like the current version of our girl. Those who know MPB will be amused to see this video of her future self (although she assures me that she will never become this intoxicated). Those who don't will just enjoy the fabulous rendition of Leonard Cohen's Hallelujah by Tim Minchin with Geraldine.

Let me know if you've had any good Google giggles or revelations by clicking here. And if you have a little more time, click here to read my new post on the Chicago Moms Blog about Obama's gift giving snafu.
Posted by Susan Bearman at 12:54 PM

i got an email from a lady who googled herself and found me. same first and last name AND same husband's name! she is in england and i am in america. we emailed a little bit but she must have found me weird because she stopped.

Check out the link I posted to make it easy to find name twins. http://tinyurl.com/bkm24y

:) I too have a name twin. She is in college somewhere, and thats all i really know. I haven't researched it at all, simply because I don't have time, but I find it all fascinating!

Everyone has their favorite way of using the internet. Many of us search to find what we want, click in to a specific website, read what’s available and click out. That’s not necessarily a bad thing because it’s efficient. We learn to tune out things we don’t need and go straight for what’s essential.
This goal-oriented way of surfing the web is largely based on short-term results. For example, finding facts to write a blog post, doing a comparison before making a purchase and reading a news site to find out what’s happening right now.
www.onlineuniversalwork.com