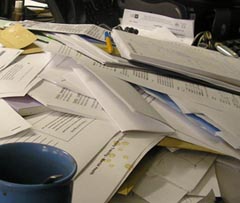 Of the myriad skills necessary for effective parenting, I would have thought that years of working through school and in offices would have prepared me well to handle the paperwork. Wrong.

Four kids, four schools, six doctors, two dentists, several teams, too many extracurricular activities and one dog add up to a lot of paperwork. That doesn't even take into account my own personal papers. No matter how hard I try, I just can't seem to stay on top of the never-ending influx of health forms, permission slips, report cards, sign-up sheets, camp forms, registrations, family histories, and emergency contact sheets. And those are just the forms I have to complete and return.

Then there are the read-only materials, the read-and-file materials, the read-and-act-upon materials and the what-in-the-hell-am-I-supposed-to-do-with-this materials. You've got your newsletters, your flyers, your invitations, your reminder sheets and your save-the-dates. And don't forget or misplace the calendars and class lists and team rosters and schedules. Clearly, the promise of a paperless society is nothing but cruel joke.

On top of the sheer volume, there are the two additional complicating factors in the battle of parental paperwork. First, many of these materials arrive weeks or months before they are due, like the camp forms that come in November for activities that won't take place until the following July; or the forms to schedule a Bar Mitzvah that is still two years away. This early-entry paperwork is just a disaster waiting to happen. Forms are like socks — half of them are sucked directly into the black hole that hovers over our house.

The second factor that interferes with efficient paper handling is that many of these materials want me to return them with checks — you know, actual money — for fees, deposits and dues. I don't know about you, but our family does quite a bit of financial juggling, so I can't always afford to write a check for monies that aren't technically due for a month or more.

So, here is where my tale of woe leads me down a bumpy path directly to the the hall of shame. My daughter, one of the world's most organized individuals, is taking an advanced placement (AP) class in high school. We are new to the world of AP and its particular brand of red tape. In addition to taking the class as part of their regular course load, AP students take special exams that are given on the same date everywhere in the country. There are registration forms and fees associated with each AP class and exam.

About six weeks ago, we got a packet in the mail with all kinds of information about test dates and fees and schedules. The $86 test fee was due absolutely no later than Friday, March 20 — no exceptions. If you have been paying attention, you have probably already guessed that I missed the deadline. I could give you a million very good excuses, but the fact is, I screwed up. My girl has busted her butt all year in a college-level class, and I forgot to send in the stupid check. I couldn't sleep all weekend, waking up a hundred times a night with the same cold sweats and stomach churns that have prevented me from pursuing a master's degree. I can't take the pressure of the paperwork.

What to do? Stoop even lower, of course, and give my daughter some brilliant advice about how to wiggle out of the mess I made — I told her to lie. We woke up extra early Monday morning and headed to school, where I coached her to go in and tell the woman collecting the checks that her mother had been out of town for a week and had accidentally taken the form and check with her. It was a plan — not a good plan, I admit, but it might have worked, except the woman wasn't there.

So, I sent my girl back into school, telling her to put the envelope in the woman's mailbox with a note that said she would check in with her Monday morning. Remember, it was already Monday morning. The implication was that the envelope had been turned in on Friday after the woman in charge had already left for the day. I know, I know. I am a terrible, horrible mother.

The good news is that there were many other similar envelopes in the mailbox, and when my girl checked in with the AP woman (as she promised she would), she was assured that everything was fine.

Fine. Unless you count the fact that I totally flushed my integrity, credibility and any hope of ever claiming the moral high ground again with my daughter, then sure, everything is fine.

This is an original Chicago Moms Blog post. When Susan isn't hanging her head in shame or digging out from under an avalanche of paperwork, she can be found writing pulp-free at Two Kinds of People and The Animal Store Blog.
Posted by Susan Bearman at 6:28 PM

Sooo funny! I'm nodding and saying "uh-huh" half way through this, then laughing and cringing the rest of the way. By the way, congrats to your daughter for taking a tough AP class - good for her!

No worries, I forgive you. :) Maybe if we hide from the paperwork, it will all go away ...

Oh you poor thing. I swear this stuff gives me nightmares. I finally made copies of a preschool application and just reused it, it's all the same fricken info, why can't there be some central repository? Another thing, hate to say, where moms often end up taking charge.

The duplication year after year at school is what gets me, but having been a teacher, I know that this is part of the protocol and nothing can be easily omitted.

Yes, the crush of paperwork started in preschool and years later, continues to be the bane of my existence. That said, with all my blogging and social media work plus emails from school, synagogue, the Democratic Committee (from which I finally unsubscribed) it can be a fight to organize my email on a regular basis. Did I say fight? It's a losing battle.

Congrats on getting the check in after all. I hope your daughter does well on her AP test!