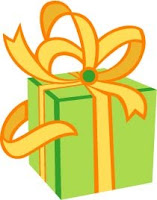 Gift giving and gift receiving are both subtle arts, as evidenced by the recent brouhaha over the gifts exchanged by President Obama and British Prime Minister Gordon Brown. Seems the 25 DVDs of American film classics that Obama presented to Mr. Brown did not quite compare to the ornamental pen holder made from timbers of the HMS Resolute, the sister to the ship that yielded the wood for the President's desk in the oval office. Oh, yeah, and a framed commission of the of the HMS Resolute. And a first edition of the seven-volume biography of Churchill by Sir Martin Gilbert. We won't even get into the kids gifts.

If it is truly the thought that counts, it doesn't seem to me that a lot of thought went into the DVDs. As British columnist Iain Martin told NPR's Robert Siegel, "We do have television and DVDs over here."

I love choosing the exact right gift for someone. It's gotten harder, both due to tough economic times and lack of actual time, to put the same kind of thought and effort into my gift giving, but it still affords me great pleasure when I do it right. And doing it right has nothing to do with how much something costs. The question should always be "Will this delight the person receiving it?" The right gift can be something longed for, or something never even dreamed of. It can be huge or tiny or completely intangible. It can be the result of great effort or a serendipitous find. But the perfect gift is always personal — meaning specific to that person.

I once gave my father several DVDs as a gift for some holiday or other; not 25 of them, but several at least, maybe five or ten. My father is a movie buff and these were the films of Stanley Kubrick, his favorite director. He loved them. The DVDs were personal for him.

I've tried to instill this love of gift giving in my children as a sort of antidote to the constant case of the "I wants" that seems to infect the young (and the not-so-young). Even more importantly, I've tried to teach them the fine art of being a wonderful gift receiver. This isn't as easy as it sounds.

When I was a kid, we visited a distant elderly relative who gave my brother and me each a wildly inappropriate gift, hopelessly out of fashion and much too young for us. I seem to remember accepting it reluctantly and proffering a very weak "thank you." My mother was furious, and gave a lecture on the way home that still stings when I think about it. It ran along the lines of how lovely it was that someone who barely knew us took the time to go out shopping, spending perfectly good money to purchase a gift for each of us, and that that effort alone was a precious gift, and that if we were ever lucky enough to receive another gift in our lifetimes, we had best show profound and humble gratitude, no matter what that gift was.

I will also say that my mother set the best example, still reigning as the champion gift receiver of all time. We gave her some really lame gifts when we were kids, including an atrocious brooch with plastic turquoise cherries, some horrible perfume and a plastic cup that my brother melted in the oven for some scouting project. She loved them all. I swear you could wrap an empty box in the Sunday comics and my mom would say: "For me? Oh, thank you so much." And you would feel so good. I hope I have taught my children as well.

On the other hand, I know people who, no matter what gift is given, always ask if I kept the receipt so they can return it. How rude.

Sometimes we receive gifts that may not be exactly what we wanted or expected. Perhaps the gift giver was busy or preoccupied, say with a crushing economic crisis, mounting unemployment and a brand new job. This is where knowing how to receive gifts graciously can make the entire experience pleasant for everyone. After all, giving and receiving gifts is meant to be joyful.

So, on behalf of the American people, I would like to thank Mr. Brown for the lovely, thoughtful gifts he bestowed on our new President. I hope he and his family enjoy the movies. And to Mr. Martin and the rest of the British press, my mother says that a simple "thank you" will do.

This is an original Chicago Moms Blog post. When Susan isn't busy wrapping presents and writing thank you notes, she can be found writing at Two Kinds of People and The Animal Store Blog.
Posted by Susan Bearman at 6:52 PM

Great post. I'm a terrible gift giver and receiver but am trying to change that! (And I'm just shaking my head about the cross-atlantic gift exchange.)

Its better to give of course than to receive gifts from other.

Give and take is the best attitude when it comes to giving gift.