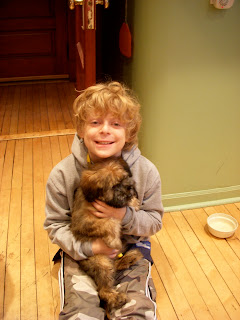 There are two kinds of people in the world: pool people and beach people; dog people and cat people; bloggers and non-bloggers. Welcome to my blog: Two Kinds of People (2KoP). I have been wanting to launch this blog for some time now. Everyone knows two kinds of people, and I'd like to share some of my favorite kinds. So, why now? That I can tell you in one word:  puppy.

We have a new puppy. We have had her for exactly one week, and during that time I have learned that there are two kinds of people: those who are capable of the simple task of naming a new puppy and those who are not. We (and by we, I mean everyone in my family except me) are completely incapable of puppy naming.

This pet-naming impairment is a particular liability for our family because we actually own a pet store. How does it look when pet store owners can't even come up with a name for their own dog?

I'm embarrassed to admit that this is not even our first time at bat. Late last fall, we lost our dear first family dog, Roscoe (see the picture of the cute blonde fellow). He was young and it was a tragic loss for our family. When we got Roscoe, about three years ago, it took us six (6!) weeks (Weeks!) to name him. Some of us (not me) wanted to give him a traditional moniker, like Fido or Rover. I wanted something clever and literary (like Thurber). My husband suggested our street name (awful and boring). My father suggested "For Sale." So we argued — for six weeks.

Now, Roscoe was a wonderful dog, but he was not the brightest puppy in the pound. I contend that part of his problem was a severe identity crisis stemming from six weeks of namelessness. I won't let that happen to our new girl.

Like Roscoe, the newest addition to our family is a Soft Coated Wheaton Terrier. Right now she looks like a little black and brown teddy bear, but as she matures, she will turn blonde and fluffy (don't even think about it — she will not be named Fluffy).

So, my friends, in the spirit of celebrating my new blog and our new dog, I am sponsoring a Name-that-Puppy Contest. Check out her picture and see what inspires you. If your suggested name is chosen, you will win our puppy's voice on your answering machine (apologies to Carl Kasell).

Personally, I think Thurber is great! But to get the connection, you'd have to know what a Thurber dog looks like.

"Swiffer!" Not only does she look like a "Swiffer," but can't you imagine yelling "Here, Swiffer," throughout the neighborhood? I'm likin' it!

Papa says: Whoopie.
Grandma says: Woobie (like you used to carry around when you were babies.

Hey Suze--Sara and Judi say "Hazel," Jim agrees with "Swiffer" (without even knowing it was already suggested by someone else!) and Brad says "Cassie."

how about "Carmela" or "Caramel"- she kind of looks like a yummy piece of caramel to me!

ps. i look forward to more of your blog- & you have a pet store??

Yep, we have a pet store. Click on the words pet store in my blog or visit us at www.theanimalstore.com.

Mom votes for Mopsy or Missy.

I like Carmella a lot. Or Carmaleta, the girl from Series of Unfortnaute Events... Oh what about Violet?

I like Carmel, and Tilde reminds me of Tilda Swanson, which could also be really cool.

Lori says: Britney (as in Spears) or an Anna (as in Nicole)or Marilyn (as in Monroe). But those are such sad stories.