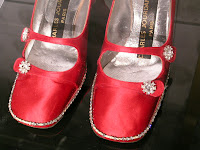 There are two kinds of people in the world: those who love shoes and those who don't.

I have never understood shoe lust, and this has severely limited my experience of popular culture. Sex and the City references to Jimmy Choo and Manolo Blahnik were completely lost on me. I hate everything about shoes: shopping for them (boring), paying for them (expensive) and wearing them (uncomfortable).

I know, as a woman, I stand virtually alone on this side of the shoe aisle. I have several friends who live for shoes. "My shoe size never changes, no matter what I weigh. I love that about shoes," says one close friend and Shoe-bie. Of course, that's not exactly true: BC (before children) I was a consistent size 8; three pregnancies and four children later, I range between an 8.5 and a 9.

It doesn't take a psychologist to recognize that my shoe phobia probably stems from wearing "corrective" shoes as a child. I was diagnosed as flat-footed and knock-kneed and sent with my mother to a cute podiatrist named Dr. Pancratz. I had a little crush on him, which is the only explanation I have as to why I allowed myself to be tormented by him for years.

The abuse was both physical and mental. Physically, every Saturday he taped my feet, I believe in an attempt to create an arch. I remember having to bathe with my feet hanging out of the tub and having to remove the tape residue every Friday night with nail polish remover. Then there were the bizarre exercises that required me to stand on the edge of a telephone book, extend all the way up on my tiptoes and then slowly stretch my heels down to the floor. Finally, there were the specially made shoe inserts.

Though the inserts contributed slightly to the physical abuse, it was the emotional distress they caused that has left the lasting scars. I have very wide feet and the inserts required my shoes to be even wider (I seem to remember EE). Including inserts, each shoe weighed more than two pounds, creating a somewhat less than graceful gait. More importantly, the shoes were stone ugly. At that time, all the little girls I knew were wearing penny loafers and Mary Jane's. Mine were ridiculous leather lace-up things. For some reason, the manufacturers thought if your foot was wide, the toe part of the shoe should be even wider. In a futile effort to make these boats more "fun", my poor beleaguered mother bought me a blue pair and kicked in the extra buck for red plaid laces. Bozo would have been jealous.

My shoe angst has not subsided in adulthood. Those freaks on "What Not to Wear" have tried to convince us that we are not properly dressed unless we wear high heels (even with jeans). High heels were definitely invented by a man. They are nothing but expensive, self-financed torture devices. Oprah has been quoted as saying: "My feet are still on the ground, I'm just wearing better shoes." That may be true, but I've been to a taping of the Oprah show, and I know for a fact that she takes off those expensive shoes during commercial breaks. Sadly, my life rarely includes a commercial break.

Very well put mom and boy am I glad that I don't have to go any foot corrective doctor. But I still like my shoes, thank-you-very-much.

Nice to get the orthopedic slant on footwear. It makes the rest of us feel lucky.

Here's my theory on why men have always loved women in high heels: they can't run as fast.

I have sympathy for your early foot woes. That having been said, I LOVE shoes! One of my favorite parts of the day is looking in the window of the shoe store on my way from the el to my office. If I'm having a particularly difficult day I can visit the on-line shoe departments of Nordstroms or Macys (2 very good shoe departments by the way) and it never fails to lift my spirits at least a little bit. Forget Jimmy Choos or Blahnik's - most are too high heeled for me and I've never paid that kind of money for a pair of shoes - - but I do enjoy sandals, and low to medium heeled pant-shoes and boots... MMmmmm Boots!! Last month I went on vacation and had to take an extra suitcase for all the sandals and flip-flops! Shoes are democratic. Shoes are functional as well as decorative and they will never, ever hog the remote!

Shoes are the best. The smell of italian leather and the beauty of a classic pump are pure art. Perhaps you have never ventured into a proper shoe salon. It's about time.

I was a flat-foot as a kid, too! My doctor had me clench my feet like fists and walk on their outer edges. I had to circle the dining room table a dozen times a day walking like that.

Shoes aren't shoes any more they are "investments". In what? you ask. In status. In reinforcing cultural expectations that women look more appealing to men wearing high heels. When are women going to just wear whatever they feel comfortable in ignoring peer and cultural pressure? Why allow society to dictate what women wear on their feet? Building confidence in oneself by wearing what is comfortable and healthy is becoming more widely the norm. Go for it women - wear whatever you want to wear and feel good about it.