You never know when or where or how you are going to meet someone who will touch your life in a meaningful way. I "met" the lovely and talented Laura Munson through an online writing forum called SheWrites. We struck up an e-mail conversation, which resulted in a phone conversation and then a real life meetup last month when she traveled from her home in Montana to visit family in Illinois and promote her touching, best-selling memoir, This is Not the Story You Think It Is: A Season of Unlikely Happiness.

While she was in town, Laura spoke at a benefit and shared the podium with Dr. Gary Hammer, director of the adrenal cancer program at The University of Michigan (go blue!). Laura posted about her personal experience with adrenal cancer on her blog These Here Hills. The post, "Rare Cancer, Rare Doctor" also ran in the Huffington Post on 10/18/10.

Because this is such an important message, and because Dr. Hammer's hypothetical letter to a hypothetical patient is a powerful treatise on the doctor-patient partnership, and because the post includes a beautiful Two Kinds of People reference, I am honored to include it here today as a guest post. Please read and share. 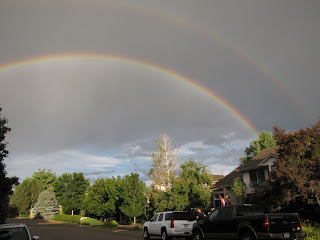 To that end, here is what appeared the night my sister-in-law died. Over her house, for all of us to see. I’m going to believe that it is possible to make rainbows if we want to deeply enough.
Dr. Hammer, then, is making rainbows in acts like [this open letter to cancer patients] (get out your tissue).
-------------
Thank you Laura. Thank you Dr. Hammer.

Thanks, Susan, for helping to get this important message out. You have touched my life too! yrs. Laura
http://lauramunson@wordpress.com

I read this beautiful post after you posted the link on FB--love how these connections open to us--via people we connect with originally through the internet---like you. Hope to see you next time I'm in Chicago, too!

Laura and Darryle — It's hard to believe that two people who have come to mean so much to me have come into my life through the Internet. These are amazing times. Laura, you should definitely read Darryle's stories of hope, creativity and survival on I Never Signed Up for This …; and Darryle, you will love Laura's stories on these same themes and others at These Here Hills. You are both gifted writers. I'm shocked and embarrassed to realize that neither of you are on my blog roll, which I will remedy right now.

Such timing, my friend. Having learned last night that my mother died suddenly, reading your post did me good.

Oh, Barbara, I'm so sorry for your loss. As someone who relies on words, I'm always astounded by how feeble they are at conveying true comfort during times of great emotion and sorrow. Please know that my thoughts are with you and family.

Susan, I hope that I get to meet both you and Laura one of these days! Like you, I have some very good friends who I originally "met" online. In fact, I made a whirlwind trip to NYC from Boston the other day to meet a longtime blogosphere friend who was leaving the country. Strange impetus, indeed, since I didn't know him in real life anyway, but there you go. I was so very happy I made the trip. Connections are where you find them, especially in these unsettled times.

I had read Laura's piece and Gary's letter previously, but, somehow, they were even more compelling on your blog. Perhaps it was the photos. I had NOT seen the rainbows before. How very beautiful and compelling. Thanks for giving me another opportunity to reflect.

Beth — thanks for stopping by 2KoP. Laura's piece and Gary's letter are worth a second look and I'm glad you found them here. Connections are, indeed, where you find them — or perhaps where you make them. The Internet is providing a whole new venue for spirits to connect in ways never before possible. I hope to meet you IRL someday, too.