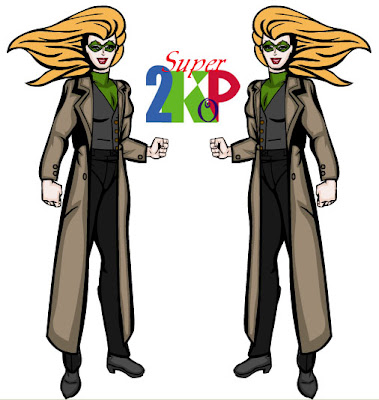 There are two kinds of people in the world: regular people and superheroes.

I was never a huge superhero fan. Sure, I watched hours of Superman reruns (the black and white one with George Reeves) and Batman (Pow! Bam!), but that was only when there was nothing better on (like reruns of Petticoat Junction and Gillgan's Island).


Maybe it's because there weren't many great female superhero role models. I hated Wonder Woman's outfit. Bat Girl and Super Girl were lame wannabes. Then there was Catwoman, but she was kind of an antihero whose only superpower appeared to be sex appeal. Besides, I could never have pulled off that skin-tight black thing she wore.
The guys had the real super powers — faster than a speeding bullet and all that. But if I could reinvent myself as a superhero and choose my own super power … hmm, what would it be? Time travel? Invisibility? Teleporting? Flying? So many choices.
I first started thinking about this after hearing the Superpowers episode on This American Life, way back in 2001. (Subliminal message: it's pledge week — support NPR if you can.) But the question resurfaced today when I was tagged by E. Victoria Flynn of the fabulous blog Penny Jar. The first question:
If you could have any superpower, what would you have?

It has finally become clear to me that the only superpower I really need is the ability to be two places at one time. It all started when I married a man who had two children, and the two places at one time thing would have come in very handy. It would have been handier still when I had twins. And then two more boys, just 16 months apart. It would be really handy tomorrow at "Take-your-parent-to-school Day", because those two boys are both at the same school. At the same time. In different classrooms. You see where I'm going with this.
2. Who is your style icon?
It's my daughter, who was recently voted the style icon of her freshman (college) class. The girl has the "it" factor and, man, can she accessorize. 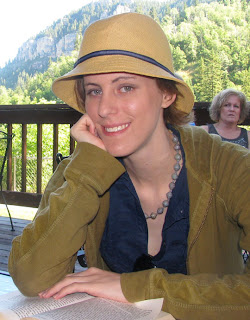 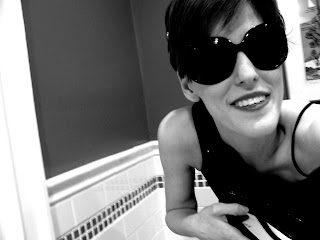 3. What is your favorite quote?
Oh, there are so many. I love the Fitzgerald quote in this post; and Robert Benchley's Law of Distinction — the ultimate Two Kinds of People quote. But today I think I'll go with a little ditty by Ogden Nash:
"Candy is dandy, but liquor is quicker."
4. What is the best compliment you've ever received?
When I was in college, I wore this fabulous black trench coat and a real Stetson fedora. I was sitting in a cafe when a waiter came up to me with a martini. He said that a gentleman  had bought it for me because I looked like Greta Garbo. When I asked who the gentleman was, the waiter told me that he had ordered the drink on his way out because he thought that I wanted to be alone.
5. What's on your iPod/CD player right now?
Mercy by Duffy. Also liking OK Go's new tune, White Knuckles.

6. Are you a night owl or a morning person?

Please. Have you seen what time I usually post? Night. Owl.

7. Do you prefer cats or dogs?

As the co-owner of a pet store, it would be unethical (and unwise) to express a preference. But it may be a future 2KoP post, so stay tuned.

8. What is the meaning behind your blog name?

And now, I offer you these three exceptional blogs:
Artichokes and Aristotle
Darryle Pollack — I never signed up for this …
Christine Wolf's Blog

Those of you who are blogless or who have yet to be tagged, feel free to leave your answers to any or all of these questions by leaving a comment here. And while you're in the the neighborhood, stop by and see my latest post on The Chicago Moms, which also went up today.

I need to take classes from your daughter--yeowch!

Thanks for playing along. The more I read, the more I love this blog. :)

EVF — Wow, that was the fastest comment I've ever gotten! I'm still proofreading. And yes, she's pretty awesome. Not that I'm biased or anything. I can say all this because she absolutely did not get her sense of style from me.

Really enjoyed reading this; and then at the end, how sweet to find you recommended my blog! Thank u--and isn't it amazing when your kids turn out to have talents you can only dream of? She's adorable.

Darryle — Thank you. I recommend your blog whenever I get the chance. It's great. Hope you take up the challenge of the meme. And yes, she is adorable and has many more amazing talents than dressing herself, including being an emerging writing talent.

When it comes to fashion, I emulate a girlfriend who has real style too.

And as to being a day or night person (Night owl, that is.) I am way too much a night owl. But I can catch a few zzzs during a nap once in a while too!

Thanks for the blogs to view!

I think my superpower would be teleportation. I couldn't handle being in two places at once - I can barely keep my mind on the place I'm in when I'm there! ;-)

Ciss B — Hope you enjoy them.

Kario — teleportation is high on my list, too. I think it would be a good fallback superpower, in case my two-places-at-one-time superpower goes on the fritz. Thanks for reading.