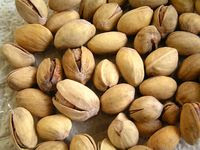 My children love pistachios. I love them too, although not as much as I did before my kids started leaving Hansel-and-Gretel trails of shells in their wake every time I buy a bag, even though our rule is "no food upstairs."

Last spring, we were sad to have to cross pistachios off our grocery list when the FDA issued a warning of salmonella contamination in certain pistachio products. It seems that the all clear has been sounded and that pistachios processed and packaged after June of last year are again safe to eat. Even though no cases of human illness have been directly connected to the salmonella contamination of pistachios, the industry took a big hit last year.

As a small business owner myself, I can understand the need to do something dramatic to change the image of a product that has been cast in a negative light. I've been doing my part to support pistachio farmers (and keep my kids happy) by buying the tasty little nuts to snack on and pack in school lunches, but now I find I'm going to have to stop, at least for a while, and it's all because of Levi Johnston.

Well, not just Levi. The fault really lies with Lynda Resnik, whose marketing team hired Johnston to shill for Paramount Farms, which grows 60 percent of America's pistachio crop. In case you've been living under a rock, Levi Johnston is one of those famous-for-being-famous celebrities who rose to the top of that dubious heap by knocking up Sarah Palin's teenage daughter, Bristol.

Maybe I've completely lost my sense of humor (as my husband sometimes implies), but I'm no prude. I admit my funny bone is tickled by different things since I became the parent, and that my world view has shifted again since my children became adolescents. I'm concerned about the messages they receive at just the time in their lives when outside influences are making a bigger impact on them than ever before.

The tag line of this tacky ad campaign is: "Now Levi Johnston does it with protection." I can't begin to count the number of ways this seven-word slogan offends me. I don't understand this beleaguered industry's choice to associate their product with a teenage father and Playgirl model, and I don't understand the implication of using protection while eating pistachios. "Get crackin'" is the overarching theme of the ad campaign, so maybe the ad means that if Johnston had been busy crackin' open pistachio shells, he wouldn't have had time to get busy with Bristol.

To me, this ad says: Hey, look kids, if you get a teenage girl pregnant (especially one with a famous mom), you can have a great career as a Playgirl model and a commercial spokesman. Where are the consequences? It used to be that people were shunned by society for these kinds of mistakes. I'm certainly not advocating that, but can't we find something between total excommunication and rewarding bad behavior with lucrative contracts?

Sadly, evidence shows that the new ad campaign has had a positive effect on pistachio sales, which have increased 244 percent since October. Those numbers may drop a bit for a while, though, since I don't think I'll be buying any pistachios while that campaign continues to run. I get the irony that by writing this post, I have both extended Mr. Johnston's 15 minutes of fame and promoted the pistachio industry, but hey, a woman has a right to rant.

When Susan Bearman isn't busy picking pistachio shells out of the couch cushions, she can be found writing at Two Kinds of People and her writing Website, www.bearman.us. This is an original Chicago Moms Blog post.
Posted by Susan Bearman at 11:27 PM

These were the comments from the original Chicago Moms Blog post:

I agree totally. Levi is one of those celebrities who is famous just for...well... nothing good! But, alas, we're fascinated by those. I'd suggest talking with your kids about why this whole thing gets on your last nerve. Use it as an opportunity to talk about the stupidity practiced by Levi and Bristol (another brain trust). That way you get to broach these touchy subjects without making it personal to your child. And, in the interim, I'm with you on not buying these nuts until that nut is off the stage.

Susan, I love this, and I'm posting it on Twitter. If you have a Twitter ID, I'll add it. Either way, thank you for speaking up!

Or you could look at it as a kid who made a mistake who is now earning money to care for his child ... I'm not defending his actions or his celebrity, but I don't begrudge whatever he undertake to earn a living. If I had to choose between being an electrician in the Alaskan tundra to make a living or being a model, I'd have made the same choice he did.

As i said, Rox, I blame the idea person behind the ad far more than I blame Johnston. You're right. Everyone makes mistakes. And everyone's entitled to make a living, and supporting your child is certainly important. But there are other jobs. Being an electrician on the Alaskan tundra is only one. Personally, I don't think this is a great legacy to leave your child or a good example to set for him either. This baby was already born with a lot of baggage.

I totally agree with you. The kid is reprehensible. teenage pregnancy is at epidemic levels in our state so we don't need role models that encourage that behavior. Especially when the family purports to adhere to Abstinence Only education. Thanks for the heads up but i don't know if I can give up my pistachio habit. I'll just concentrate on trying not to chip my nails as I break then open.

These commercials annoy me as well. If you notice, they say his name a couple of times because clearly many people wouldn't otherwise recognize him (with his clothes on?). There are a couple of other ads in the series, but like you, I don't think they speak to me as a consumer/mom.

It seems like we often ate those red pistachios as kids. Have those gone by the wayside as nothing more that a senseless waste of food dye?