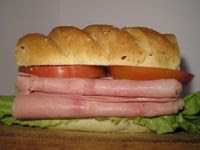 Last week, I officially joined the Sandwich Generation, a growing group of adults who find themselves caring both for their dependent children and their aging parents. For my husband and me, it happened rather suddenly when my mother-in-law's planned two-day hospital stay for sciatica surgery turned into five days in the hospital, an indeterminate time at a rehabilitation center and the need to go home with at least a part-time caregiver. Can you say "unprepared"? Because that's what we were — totally unprepared.

We shouldn't have been, because the woman is 80 years old. Granted, she is in generally great health and has always been fit, but 80 is 80. When someone cuts into your spine when you're 80 years old, you tend not to bounce back as quickly as you used to, a fact we all should have considered before the surgery. Our bad, as my sons say.

On the other hand, I have two high schoolers and two middle schoolers at home, so we have a long way to go before emancipation from daily parenting responsibilities. In addition, one of my twins, who is now 18, has some learning issues. His sister has applied to college for the fall, but we have no idea yet what his next step should or will be.

So if we are sandwich fixin's, what do we call the side-order of angst that was served up yesterday by my pediatrician's office. When I called to the have the aforementioned high-school son's prescription refilled and to make an appointment for a physical, the receptionist told me: "I'm sorry, but I can't do that. Your son is 18 and you can no longer make appointments for him. In fact, I cannot discuss him with you at all."

This is a boy who can't find his socks in the morning. This is a boy with a short-term memory deficit and a sequencing disorder. This is a boy still catching up from the trauma of being born 16 weeks prematurely at a pound and half. He didn't walk until he was two; he didn't talk until he was four; he didn't eat or grow until we put him on growth hormone. But suddenly, because of a date on a calendar, he is supposed to be completely in charge of his own health care. How about a grace period? True, his birthday was November 17, but his due date wasn't until March 1. At least that would give me another few weeks.

Fortunately, this young man, who still struggles with a few things, does understand that we are his best advocates and he chose to sign a medical power of attorney. Now, I can make appointments, discuss his health care with his team of providers and continue to help him on his journey toward independence. But, again, I was totally unprepared.

I don't really consider myself a slacker in the parenting department (maybe a procrastinator, but not a slacker), but it sure would have been nice to have a little heads-up about exactly what happens when they turn 18. Damn, I knew I should have kept that manual that came with them at birth. Oh, wait, no, that was just a hospital bill.

So I'm feeling a little hard pressed these days, but I don't really think the deli analogy is apropos. Therefore, I hereby propose that we rename the "Sandwich Generation" the "BarHop Generation" (that's BaRaaHP for "Between a Rock and a Hard Place"). All those in favor, say cheers.

This is an original Chicago Moms Blog post. When Susan Bearman isn't busy trying out condiments, she can be found writing at Two Kinds of People and working on her new writing Website, www.bearman.us.
Posted by Susan Bearman at 11:36 PM

Cheers to you, Susan, for another great post. You always give me something to think about, and usually a chuckle or two as well.

Yep. That there's a hard place to be in. Hope your mother in law is doing well. Good luck with all of your children!

Sounds like you've got a lot on your plate. (Oof!)

I'm glad you son signed the waiver. I think my older so's next visit to the doctor is the one where I'll be asked to stay in the waiting room, at least during the exam.

I hope your MIL is doing better and that you are staying sane.