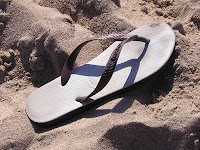 "Summer afternoon — summer afternoon …
the two most beautiful words in the English language."
— Henry James (1843-1916)
I'm no climatologist, but by my calculations the average high temperature in Chicagoland so far this summer has been about 78°F. That's been the average high. Our average average high is closer to 82°F. Now, four degrees may not seem statistically significant to you lay people out there, but let me explain this in scientific terms. We was robbed. Ripped off. Or to be completely un-PC, we were gypped.

I hear all you centrists out there — you sweater-weather people — rejoicing in your temperate way over our temperate weather. Pooh on you. It's summer, damn it, and I want me some. I want hot and sweaty and lazy. I want to lift my head in search of that waft of a cooling breeze. I want to feel like we eked out every dime's worth of our pool and beach pass purchases. I want to be so sick of summer that I can't wait for the kids to go back to school on Monday.

But I'm not. I'm dreading it. Last winter was interminable and the only thing that got me through was the thought of a long, hot summer. Now it's over and it feels like it never even got here. Worse yet, I don't think it's entirely the weather's fault that I feel so cheated. I think it's that I realize this is the last summer — or at least the last of the sweet summers we've known since my twins were born nearly 18 years ago.

Back then, it seemed like we had a lifetime of summers stretching before us. I was careful. I didn't waste our summers. We took them at a slow, leisurely pace. I paid attention. I tried not to squander them. While all my kids have gone to sleep-away camp, it's never been for more than two weeks. I'm not passing judgment, just being selfish. I wanted them home.

Since I first began to comprehend the concept of time, at just five or six years old, I recognized the incontrovertible (if inexplicable) law of nature that each summer is shorter than the last. Every winter, since that first dreadful one we spent on the NICU, I have made Big Plans for our summers. I dreamed of berry picking and bike riding and picnics. I planned how we would explore the city and discover a thousand new worlds in our own backyard. I envisioned car washes and sprinkler showers and lemonade stands. And bubbles. And sidewalk chalk.

We've done all those things, but not enough of them, if you know what I mean.

Next summer is technically our last one before the twins head off to college or work or whatever lies ahead for them; but this was the last one that wasn't haunted by the Ghost of Summers Yet to Come, summers full of plans and changes and departures. I guess that's why they give the next to the last thing such a fancy name — so you'll pay attention.

This was our penultimate summer. It was a good one, but not good enough.

But I have hope. There's still a little time left. Even though school starts on August 31 and the pool closes after Labor Day, summer doesn't technically end until September 22 at 5:18 p.m. EDT. Do you hear that, weather gods? I want the rest of this summer to feel like summer. I promise not to waste it.

This is an original Chicago Moms Blog post. When Susan Bearman isn't ranting about weather conditions, she can be found writing at Two Kinds of People and The Animal Store Blog.
Posted by Susan Bearman at 10:08 PM