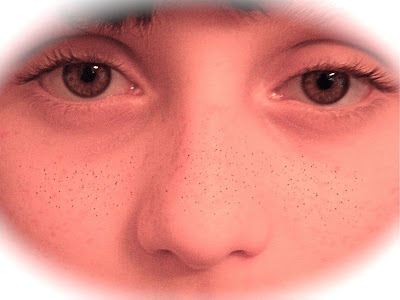 There are two kinds of people in the world: those who have freckles and those who don't.
I started thinking about this today as I smoothed sunscreen across that cute little nose you see there. I swear, if the boy could have stood still for more than 15 seconds, I would have been able to see them pop out of his skin and settle on his cheek bones. But it was hot, and the pool's siren song was just too strong, so off he went before I could get an accurate count.
Simple freckles, officially known as ephelides (but only to dermatologists), are small individual spots on the skin produced by cells that happen to contain more melanin – or pigment – than other skin cells. They are found most often in fair-skinned, light-eyed individuals, and are more common before puberty.
My son seems pretty comfortable with his freckles. Like buds on the trees, they are one of the first signs of summer.
Most of the kids I knew growing up hated their freckles. The actress Julianne Moore joined the growing list of celebrity children's book authors and revealed her own discomfort with her freckly skin in the Freckleface Strawberry books: "Once upon a time there was a little girl who was just like everybody else … except for one thing. She had red hair. And something worse … freckles."
I'm not sure I like the idea of freckles being described as "worse" than anything, but I certainly knew kids who felt that way. One friend regularly rubbed lemon halves over her face in an effort to fade her freckles. Another, a red-head who was freckled from head to toe, took the opposite tack, obsessively sunning herself on the theory that if she produced enough freckles they would eventually merge together and finally produce the tan she so desperately wanted. It didn't work; she just burned between her freckles.
Not everyone feels that freckles are a cosmetic liability. In Judy Blume's classic children's tale, Freckle Juice, Andrew tries to make a potion to create freckles so his mom won't know when his neck is dirty. Today, you can learn to "Be beautiful. Be sexy. Be freckled." at Frecklestyle.com (I kid you not).
The world of skin has completely changed since my childhood. Back then, we courted the sun. Instead of hiding, we slathered on baby oil, hoping to attract those tanning rays. Coppertone, Sea & Ski and Hawaiian Tropic were suntan lotions, not sunscreen or sunblock. Tans were in. I always found it ironic that while white America was struggling with the idea of civil rights for African Americans, most of us paid cold, hard cash to get a deep, dark tan.
Here's a bit of tanning trivia for you: while it's an urban legend that Jodie Foster posed for the little girl on the Coppertone bottle, she did make a commercial for the company in 1965 when she was just three years old (see it here on her Facebook fan page.)
In those unenlightened times, groups of teenage girls at pools and beaches everywhere would set kitchen timers so they knew when to turn and rotate their bodies to promote an even tan. My mom even had a friend who would sit in the yard with a bifold, foil-covered screen propped under her chin to intensify and focus those ultraviolet rays directly onto her face.
Somehow we used to believe that you wouldn't start to tan until you had your first sunburn of the season, complete with the stinging red burn, followed by the prickling mini-blisters and, finally, the peculiarly delicious sensation of peeling tissue paper thin layers of sloughing skin from your body. I've only had a few sunburns in my life, but I will never forget the hours I spent on the peeling process.
Now, of course, we know better. Summer,  like everything else, is one big risk factor. We can't even take a walk without worrying about skin cancer. I buy vats of the thick, generic sunscreen for our bodies, as well as the expensive oil-free stuff to coddle the vulnerable skin on my adolescents' faces. It costs a small fortune to keep us protected.
My own freckles aren't nearly as cute as those the sun sprinkles across my son's face each summer. Mostly on my arms and shoulders, my freckles are more irregular in size and color, evidence of the risky, irresponsible behavior of my youth. I'm glad I know how to educate myself and protect my family, but I miss the days when we didn't obsess about every little thing. We may have reduced our risk of melanoma, but I have a sneaking suspicion that it's at the expense of increased stress-related illness. Like Roseanne Rosannadanna said: "It's always something."
Who's your favorite freckle face. Pippi Longstocking? Ron Weasley? Howdy Doody? Click here to tell me.
Posted by Susan Bearman at 10:54 PM

Opie Taylor has the best freckles and of course Jan Brady. Those are my favorites

The Weasleys of course! This was a fun article. I grew up a fair skinned with Irish-American heritage I had freckles all over - I actually still do now in my fifties!

My son's! Although the pediatrician tried to guilt me into believing his freckled nose was due to me not using enough sunscreen rather than genetics.

All this talk of tanning had me thinking of the lady in the movie There's Something About Mary. I don't remember her name but if you've seen the movie you know who I'm talking about.

My favorite freckle face is my daughter.

Opie is my favorite 'freckle-face' too!

This brings back those baby oil frying memories -- going out the bedroom window to 'lay-out' on the roof. I'd have the tinfoil covered record album positioned under the chin for the maximum UV face blast -- and somehow read 'Seventeen' magazine at the same time. It's a wonder we didn't shrivel up like pieces of fried bacon!