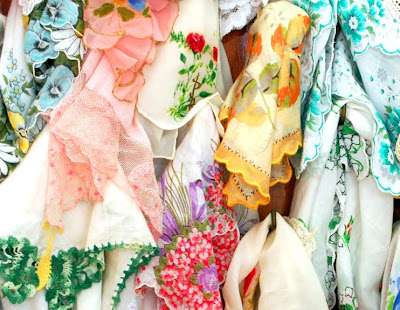 
There are two kinds of people in the face of emotional events: those who maintain a dry-eyed dignity and those who weep. If this post is splotched with mascara stains, I apologize, but I'm a crier.

We criers fall across a broad continuum, with the misters and dabbers on one side followed by your leakers, snifflers, huffers, whimperers, sobbers, bawlers, wailers, howlers and ululaters (not typically Americans; we're too uptight for that). I've always envied the misters — the ones who can show that they're feeling the deep emotions, but who are able at the same time to blink back the tears, avoid the runny nose, and preserve their makeup. I also envy the ululaters for their total abandonment and commitment to the emotion.

I  fall somewhere between a sniffler and and sobber, with the added quirk that once I start to cry, it's almost impossible for me to stop until dehydration sets in. My biggest fear is always that I'll lapse into the ugly cry before I dry up. Remember when Halle Berry, that beautiful woman, slipped into the ugly cry at the Academy Awards. I'd like to say it was a beautiful thing, but the fact is that the ugly cry usually makes everyone, crier and observer alike, uncomfortable.

I know I'm a crier, because during my wedding I looked at my groom and the waterworks started. Those who were there will remember that things were a little chaotic, what with my mom almost dying and everything, so when I reached for my pretty little lace hanky, I realized I had forgotten it. The tears kept falling, my nose started to run and all I could think about during the rest of the ceremony was that I wanted to grab the little red pocket square from our rabbi's suit coat. I would have, too, but he was 80 years old and I was afraid that kind of sudden movement toward his person might give him a heart attack.

I also know I'm a crier because our brand new elementary school principal caught me yesterday during the first grade play, where the twins played a hip-hop weed (the boy) and a swaying flower (the girl) in award winning performances. The minute the stage lit up, my tears started and our principal whispered: "Oh, you've got it bad."

"You have no idea," I said. "They shouldn't even be breathing and here they are performing, on stage, with all the other first graders." I couldn't say any more. The tears were crowding my voice and the ugly cry threatened.

But how, if that first grade play was just yesterday (and I know it was), are those same twins now experiencing the final few hours of their senior year in high school. I've done a pretty good job so far putting off the inevitable deluge, mainly because I've just been too busy and far too deep in denial (here's proof) to think too much about this approaching milestone. But it hit me hard as I drove to work this morning and I had to pull off the road to staunch the tide of tears before I could drive again safely.

It's here now, there's no denying it. Today was their last last day, and for the first time ever, I wasn't there to take their picture on our front porch (a tradition we practice every first and last day of school) and it made me cry. Tomorrow is prom — dresses and shoes and corsages and photos and tears. Next week we have to pay our fines and graduation fees (which is likely to spark an entirely different sort of crying), before we pick up caps and gowns and head off to a ceremony that's bound to be one big blubber fest.

I know these are tears of joy. I understand that all the tears of fear and anxiety we shed during five months on the NICU, years of hospital visits and worry, growth hormone and febrile seizures, speech and occupational and physical therapy — I know all those tears got us here, to this next first step, one that they will take on time with their peers. And I'm happy. Really, I am. You just can't tell because of the tears.

And there's only one thing that would make me happier: if I could do it all again.

What about you? Click here to tell us how you embarrass your family with public displays of emotion or whether you more of a stoic type.

From Crying Time by Buck Owens


"Oh, it's cryin' time again, you're gonna leave me
I can see that far away look in your eyes
I can tell by the way you hold me, darlin'
That it won't be long before it's cryin' time."


Photo credit: JGS-Handkerchiefs by gracey via morguefile.com
Posted by Susan Bearman at 2:10 PM

As a wife, mother, and grandmother I find myself in tears often. Sometimes even songs from my past or singing Happy Birthday to my kids can get those faucets to open and I have a deluge!

Tears come way too easy with me!

Congratulations!!
I have been through the graduation thing seven times (three kids through high school and college, and one just got her P.A. "white coat." I've also been through one wedding.
I'm not a crier. I assume it's that good old English blood that keeps me from shedding a single tear no matter how joyful the occasion, as above, or how painful, as when my father died four years ago.
I'm as humiliated by my dry-eyed, stiff upper lip countenance as you are by the floods. It's not that I don't feel the emotion; it just doesn't show. Here's a little secret: at my daughter's wedding, I was so ashamed of my invisible happiness, I actually faked a few tears.
This milestone in the lives of your children gives you a zillion reasons to be emotional. Rejoice in it--and remember the hankies.

Ciss B — It's so true about music, isn't it. Certain holiday songs and the Star Spangled Banner get me every time, even though I'm not especially religious or patriotic.

Mary — thank you. I will definitely try to remember the hankies. And a fake tear now again never hurt anyone, but you shouldn't feel ashamed. Tears come when they want to come, not when you want them to.

I'm a delayed crier - dry-eyed during the crisis/celebration and then, out of the blue, weeks later, the tears come. I'm usually puzzled about why I'm crying for the first 10 minutes or so. Then I figure it out. Funny, I don't feel like I'm repressing at the time but maybe I am??? (old psych major, sorry...)

I can get tearful at weddings, sob at funerals (no matter if I don't know the person that well) and even sniff through poignant adverts on TV. But I usually have a delayed reaction to personal crises - long, long after all potential sympathy has been exhausted.

Congrats to you and your twins, Susan! How exciting, and truly an emotional time this must be for everyone.
I must confess, I have mastered the ability to hold back my tears, but at every performance, sporting event, anything that involves any children, I get choked up. Only hubby (and now 2kop readers) know about my little secret. Not sure how long I'll be able to hold it all in. I'll probably break down in a fit of hysterics at some point in my kids' lives, just don't know when...

Congrats to you and the grads!

I too am a huge crier, but a really ugly one. Luckily, when I got married, I seem to have had a much more resilient, young face, and my eyes didn't puff the way they do now at the mere idea of tears. Now, show me a sappy commercial and I looks like one of those iguanas with the giant, scoping eyeballs 20 seconds later.

I don't cry on happy occasions; I only cry when I'm furious. So frustrating -- it's impossible to verbally rip someone to shreds when I'm sobbing uncontrollably!

Bev — at least you finally figure it out. I find myself getting weepy for no reason at all sometimes. My daughter just took AP psych, so now she analyzes us all the time.

Shari — your kids are young yet. Just wait, your time will come.

Helen — thanks for stopping. I'll be checking out your blog soon. A good, melodramatic ad will send me over the edge, too; sometimes I enjoy it, sometimes I resent the manipulation.

Kelly — yeah, my cries are getting uglier the older I get. I don't use much makeup, but my Almay coverup is supposed to help with puffiness. Of course, it probably all slides off with the tears.

SSheilah — HATE when I cry when I'm angry. It is unbidden and uncontrollable and prevents me from saying what I want to say. There may be another 2KoP in this.

Oh, sweetie, you made me cry.

I used to be a crier, when I was a teenager especially, I'd cry at the drop of a hat and I have a really low pain threshold. Now I barely cry at all, not because I'm stoic and dignified, or even because I dislike crying (I'm not a fan, but it's needed sometimes) but more because I've been taking Seroxat for about five years and apparently one of the side effects not on the box is a lack of crying. I didn't even realise 'til someone pointed out that might be why.

My sister on the other had, wasn't a crier but now is hysterical. She gets so upset that only dogs can understand her. She's cried at Andrex puppy adverts. My nephew takes after her, he's very sensitive bless him, and so caring that he gets upset when other people are hurt.

My son's last day of Kindergarten Party is tomorrow... I can't believe how fast time goes.
He rode his bike without training wheels for the first time this week and says he's a big boy,
He is, I'm afraid :)

evf — thanks, or should I be apologizing?

BananaBlueberry — oh, he is a big boy. Taking off the training wheels is where it all starts.

One more thing- You're on Quotable Friday today on BananaBlueberry- you gave me this quote last fall... :)

Life In A Skillet said...

I was all prepared to sob at high school graduation last week - I cried at his preschool graduation (at Baskin-Robbins with a cardboard mortarboard), at his first day of kindergarten . . . at any appropriate and inappropriate event along the way. But when it came down to it - nothing - only hot and mad about all the ridiculous airhorns people-who-don't-know-how-to-act were blowing.

Delayed tears a few days later, when I watched him vote for the first time. THAT made me teary.

BananaBlueberry — Thank you (and Charles M. Schultz) for the quotable Friday).

Maggie — It's true that other people's loutish behavior can get in the way of a perfectly good cry. Watching my daughter vote for the first time was proud moment, but for once it didn't bring on the waterworks.

Too funny!! I have been working on a piece on and off for years now about how I am a crier too. :-)

Ah, Jenny, it's nice to meet another card-carrying member of the club. Be sure to stop back by with a link to your piece if it gets posted on the Web, and thanks for visiting 2KoP.