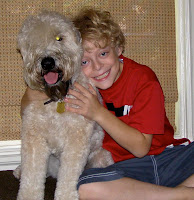 This week, May 2-8, is a big week for animals. It is both National Pet Week and Be Kind to Animals Week.

People who have known me since I was a teenager mock chuckle when I remind them that we (and by we, I mean my husband) own a pet shop. My childhood pet experiences included hating our not-quite-cocker-spaniel for shedding blond fur all over my black-only wardrobe during my angsty teenage years, and being freaked out by discovering a brief series of dead animals stiff in their cages or belly-up in their bowls. But one day, just after my twins were born, I found myself the co-owner of a pet store, and I still scratch my head over how that happened.

It's a wonderful pet shop and my husband and his staff are incredibly knowledgeable about animals. While I'm not in their league when it comes to animal-related information, I have learned a thing or two along the way, including to appreciate the deep connection people have with their family pets. The American Academy of Child & Adolescent Psychiatry states that "children raised with pets show many benefits." Animals teach children compassion, responsibility, and about our relationships with nature and each other. Children often talk to their pets they way they talk to stuffed animals, spilling all their secret fears and dreams into those fuzzy, nonjudgmental ears.

A recent poll indicates that a full one third of married women think their pets are better listeners than their husbands. I don't know about that. My dog doesn't seem to listen to me any better than my husband or my kids do. On the other hand, she doesn't talk back. In my kids favor, however, it's been a long time since any of them has peed on the floor. Of course, if the kids took the dog out when they're supposed to, then she wouldn't pee on the floor either. Some families have a synergistic relationship with their pets. Ours is more like a Catch-22.

It took years of convincing before I finally caved and allowed us to get a dog. Every time my kids begged for a pet, I told them they owned hundreds of them and could play with them whenever they visited Daddy at the store. I know, it's like the cobbler's children who don't have any shoes. But retail is a hard life with long hours and I already felt like a single parent — and I didn't want to feel like a single parent with a dog.

If you promise not to tell my kids, I'll let you in on a little secret. I knew that one day we would have to get a dog. I think it's a law or something. I also knew that I only wanted one dog during the course of raising our family, so I waited until my youngest child was 7 years old before I even considered it. I confess that this was a case of planned obsolescence. If things worked out according to plan, the dog would live long enough for my youngest son to go off to college, and then conveniently pass away right after his freshman year Thanksgiving break, having lived a happy, healthy 12 years or so (that's 84 in dog years).

So about five years ago, we got our first dog, Roscoe. He wasn't the brightest puppy in the pound, but he was a sweet dog. Unfortunately, he was killed tragically by a speeding truck right in front of our house when he was just three years old. Telling my kids about his death was one of the hardest things I have ever had to do as a parent.

My children were devastated and, while I was sad for the loss, I have to admit that things were easier without him. Two of my kids immediately started lobbying for a new dog; two felt that no puppy would ever replace their beloved Roscoe. I tried to remain ambivalent, but the damnedest thing happened. I missed that mutt — more than that, I missed having a dog in the house.

So, we got Hazel. She's much smarter and more well-behaved than Roscoe ever was, and while she isn't nearly as sweet, she and I have a good working relationship. And it melts my heart every night when the boys snuggle with her, scratching her belly and saying goodnight to the "best puppy in the world."

The passing of Roscoe was a difficult time in our family's life, but it made me understand that often, the death of a pet is the first significant loss a child experiences, and learning to cope with that loss is just another gift our pets give us. So here's to Roscoe … and Hazel … and even Maize and Blue, and all the other animals in the lives our families. Take time during these days of National Pet Week and Be Kind to Animals Week to appreciate them and all they bring to us. You can find some ideas about how to celebrate here.

When Susan Bearman isn't busy walking the dog, she can be found writing at Two Kinds of People and The Animal Store Blog, and freelancing at www.bearman.us. This is an original Chicago Moms Blog post.
Posted by Susan Bearman at 4:02 PM

Sophia Leto (a.k.a. Moody Mommy) said...
Yes, pets do teach our children life lessons. Just today our dog grabbed a rabbit and killed it right in front of the children. I love my dog, but jeez!

Love this one - but maybe that's because I am a mother to two furry kids at present. I've been a dog person since I was a little kid. But similar to your experience it has taken my husband about 30 years to really take to the dogs we've had over the years.

Ciss B — could definitely be another Two Kinds of People post: dog people vs. cat people; puppy people vs. baby people … it's limitless.

Cool profile pic, by the way.

Thanks! That's my grandmother - she was the daughter of a circus owner in the 1800s. Cool, heh?

Way cool. You've got circus blood in you. Wonder how that translates? Are you writing about it?