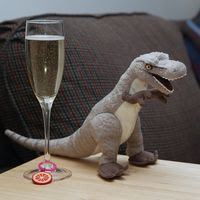 So the aughts are over. All the hoopla about Y2K seems like just yesterday, yet here we are a decade down the pike. Of course, all the hoopla over the Bicentennial doesn't seem that long ago to me, either, so what do I know?

It's been a running joke in our family that, when I feel like my kids are growing up too fast, I tell them sternly "No double digits." In other words, I wanted them to stay little forever. Like all four of my children, however, the Millennium is completely ignoring me and rushing toward adolescence, that terrifying time of turbulence, defiance and change. I'm not sure I'm ready to face four teenagers and the 2K teens all at the same time.

The aughts for me were a decade steeped in parenting. We welcomed 2000 with two eight year olds, one three year old and a toddler not quite two. We're saying goodbye to 2009 with two graduating high school seniors and two middle schoolers. How did that happen? I know my parenting days will never truly be over, but my child-rearing days will end before the next decade does, and that just feels strange.

For nearly two decades now, I've known more or less what the gig would be. Play dates and school and carpooling were the ebb and flow of life. My kids, grownup though they are, still let me read stories to them at night, when there's time between homework and after-school commitments. What will it be like in 2020 when they aren't home any more? Maybe I'll read to the dog. She'll be an old lady by then.

So while other people are counting down the minutes to midnight January 1, 2010, my countdown stretches beyond another seven years, to when my youngest boy will head off to college or life or wherever he's heading. I've promised myself that I won't miss a minute dwelling on the end. I guess that's my New Year's resolution: to live in the moment and pay attention.

Happy New Year! Pay attention. 2020 will be here before you know it.

This is an original Chicago Moms Blog post. When Susan Bearman isn't busy waiting for the ball to drop in Times Square on New Years Eve, she can be found writing at Two Kinds of People.
Posted by Susan Bearman at 12:43 AM

Here's to hoping we all make it without any regrets! This decade will also bring about many parenting changes for my family. I'm trying to be positive and live in the moment without regret, as well.

By midway through 2000, I had a toddler and an infant. This decade will be all about their adolescence and, hoping my growing career (and my husband's if he ever finds a job). By 2020, we'll likely be empty nesters. Wow.

Best wishes for the year ahead!