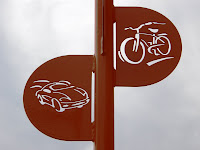 There's a storm on the horizon, a battle brewing between motorists and cyclists, and it promises to be ugly, if not deadly. I'm not sure when bicyclists went rogue, when it became a badge of honor to cut off (and flip off) any motorist in their path, but suddenly I feel under siege by these two-wheeled renegades.

Don't get me wrong, I like bike riding as much as the next woman. I was thrilled when my youngest finally joined the ranks of bike riders this summer. Personally, I was an early and avid rider and, even during my most aggressively anti-exercise phases, I have always enjoyed a spin on the old two wheeler.

But lo those many years ago, when first I learned to pedal, we were taught that bike riders had to follow the same rules of the road as did motorists. While those rules vary from state to state and community to community, we all know the basics: obey traffic signs and signals, ride in the same direction as traffic, yield for pedestrians, school buses and emergency vehicles, and generally follow the rules and etiquette of right of way.

Turns out, I'm right. According to Jesse White, the Illinois Secretary of State, bicyclists "must obey the traffic laws." It also turns out that apparently Jesse and I are the only two people in the state who have read the "Illinois Bicycle Rules of the Road" pamphlet.

I get that cyclists may have a certain moral authority, as their choice of transportation is healthier for them as individuals, as well as for the environment and, by extension, the rest of us. But here's the hard truth of the matter: when push comes to shove, car beats bike every time. While bike injury statistics are notoriously underreported, the sad fact is that both the motorist and the cyclist will end up as losers in a serious collision.

As a mom, I have young drivers and young bikers in my family, and the current state of aggression between bikers and drivers has me terrified. My daughter, who has had her license for nearly two years now, still hyperventilates when she sees an aggressive biker or, even worse, a pack of wild riders. We never know when these scofflaws are going to dart in and out of traffic, blow through a stop light or make a sudden, unsignaled turn. On any number of occasions, she has chosen to hang back, driving behind the cyclist(s) and under the speed limit, which can present its own set of dangers and complications.

I'm equally frightened for my young bikers, who are dealing with allegedly adult drivers often suffering from road rage or cell-phone distractions. Early in the school year, a child riding her bike to one of the middle schools in our town was struck by a motorist. Thankfully, she was not hurt, but I'm sure both she and the driver were seriously rattled. I don't let my kids ride their bikes to school, in part because their backpacks are too heavy to balance well on a bike, but also because I don't trust the motorists in our community.

I really want our roadways to be safe for all comers — bikers, motorists and pedestrians. Simply painting a stripe down the right side of a street to create a bike lane does not solve every issue. We must all learn to be respectful, to share and, most importantly, to follow the rules of the road. End of lecture.

This is an original Chicago Moms Blog post. When Susan Bearman isn't nagging about travel safety, she can be found writing at Two Kinds of People and The Animal Store blog.
Posted by Susan Bearman at 8:44 PM

My pet peeve is when those on a bicycle do not stop at stop signs.

Amen on the bikes. I live in Logan Square, where two bicyclists have been killed recently. Does that make the people on bikes any more careful? Nope - they dive around corners, shoot through red lights in heavy traffic, weave in and out around cars, and slam through stop signs. I'm all for a greener, healthier method of transportation, but these daredevils scare me to death. I'm a careful driver, I try to be aware of bicycles, but shouldn't there be some onus on bicyclists to respect cars and the rules of the road?