Most of Us Have Gears We Never Use* 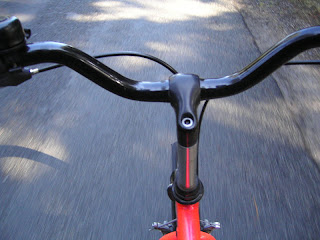 *"Life is like a 10-speed bicycle.
Most of us have gears we never use."

There are two kinds of people in the world: those who know how to ride a bike and those who don't.

I learned to ride my mom's bike when I was four. This is the single athletic feat of my life that I can claim as purely my own. I wanted it bad, so I taught myself. Standing on the pedals because I couldn't reach the seat, I pedaled and fell until I didn't fall anymore.

Riding a bike meant freedom. It also meant not having to walk every where. I come from the same genetic stock as Lech Walesa who once said: "I'm lazy. But it's the lazy people who invented the wheel and the bicycle because they didn't like walking or carrying things." (Hey, don't knock his philosophy of life; after all, he did win the Nobel Peace Prize.)

Lately, I'm a little freaked out by the wild packs of bikers that seem to be taking over the streets in their obscenely tight padded shorts and moisture-wicking jerseys. These Lance Armstrong wannabees are in a fight-to-the-death struggle with the internal-combustion engine. I was taught that cyclists are have the same rights and responsibilities as motorists when on public thoroughfares, but these road warriors are heedless of the rules. They know that when push comes to shove, the motorist will be blamed for any accident, so between March and November I live in fear that one of these
avid cyclists is going to jut in front of my car and be squashed like a bug.

Given the tension between bikers and drivers, it's no surprise that the history of the bicycle roughly parallels the development of the automobile. This may also explain why my love affair with the bike came to an abrupt halt on my sixteenth birthday, when I got my driver's license. (Now would be a good time to refer back to the Walesa quote.) Even so, I have never truly lost the joy of biking, although helmets have put a real damper on that whole wind in your hair thing.

Several years ago, my mother-in-law gave me her old bicycle, a comfort bike that lives up to its name, complete with a bell and the modern equivalent of a basket. Through no fault of her own, my bike and I have a fickle relationship. Sometimes she and I go steady, and other times I'll take her on a date and not call again until the next summer.

Part of the problem is my kids. Only half of them know how to ride, so when it comes to getting the family from Point A to Point B, we've mostly relied on the minivan.

At six, my daughter decided to learn to ride her bike, and after hours of tears and yelling, succeeded in forcing her body to master the machine — in one day. Her twin brother is still a non rider at 17. My middle boy is a cautious, by-the-book kind of guy who approached learning to ride a bike like a military general plans and executes a week-long siege. He strapped on all his safety gear every day, practiced for a reasonable length of time, then put the bike away, only to make a fresh start each morning until he had won the war.

My youngest, the "me too" of our family, really wanted to follow in By-the-book's footsteps, but wasn't quite ready. He gave up out of frustration or humiliation or both and hasn't wanted to try again for three summers. Yesterday he announced he was ready, so tonight after dinner, we gave it a shot. He has matured both physically and mentally over these three years, and after just a half hour or so of trying, he is so close he can practically taste it. He started getting skittish, though, so rather than risk another (perceived) failure, I told him he was doing great and that we would try again tomorrow. He was simultaneously a little proud of himself and relieved to pause his efforts. As he closed the shed, his parting shot echoed Mark Twain, who said:

"Get a bicycle. You will not regret it. If you live."

This summer, we (and by we, I mean me) are trying to be a little leaner and greener. We are trying to fool our bodies into fitness by doing "fun" physical activities without referring to them as exercise. The old minivan is less than 25 miles away from hitting the 100K-mile mark. The mom is less than 18 months away from hitting the big 5-0. We all have to make some sacrifices to keep things running. I'm hoping we'll find a few answers in our two wheelers.

When did you learn to ride a bike? Did it come naturally, or only after a struggle? Click here to tell me your story or to speak your peace about the Critical Mass movement.

I don't remember not knowing how to ride a bike, but I rarely ride. I probably hopped on my bike five or six years ago. My lazy gene doesn't allow me to take it to the bike shop to be checked out and fixed up.

My son stopped riding when he became too cool for helmets. In our family there is no bike riding without helmets. My kids dad was a neurosurgeon who saw too many horrible accidents from kids who rode without them. Yep, even just in their own driveway.

Ah, you can always count on me for a sweet story.

My family and I came to America from the Former Soviet Union in late 1990. I remember, while living in an apartment in Chicago, sometime in 1991, I learned to ride a bike.

We didn't have money to buy a new bike, so my brother -- 12 yeras older than I -- found a bike in the back alley somewhere. By no means did he steal anything, this bike was most certainly being discarded.

I was 9 at the time and he brought the bike over to the apartmet building and said, "You're learning to ride a bike." Not really a choice, more of a statement.

So, sans training wheels or proper protective gear, he set me up on top of a hilly rode next to our house, and pushed. As I found out later in my life, this was the norm in learning to ride a bike back in the USSR. Please don't ask how we learned to swim...

Now a couple of notes: This bike had only half a seat and 1 pedal.

I didn't make it down the hill on the first try. But will that stop my brother from picking me up, dusting me off, and putting me right back on top of the hill? No.

I learned to ride a bike well by the end of that day.

Now, I have both the motorized and human-powered bikes, both of which I greatly enjoy.

Somehow, I miss that one-pedal, half-seated bike. It was a challenge. My first bike that had all the parts just wasn't as fun.

My reason for wanting to learn to ride a bike was much the same as yours - freedom. However as the eldest of five kids with my dad working a factory job that didn't pay enough I had no bike unless I was willing to buy one myself, or use the extremely old, rusty one that was my mom's bike.

I went down to a neighbor's driveway that was a downhill ride right into the street (Thank goodness we lived on a very quiet street traffic-wise!).

I think I rode and fell at least 1,000 times over the two weeks I practiced being a cyclist. (I have a inner ear problem so it did take me a little longer than most.) But the freedom that the old bike gave me was a real gift I will never forget!

Well that is all good and fine (I don't have to leave a comment about how I learned to ride my bike, thankyouverymuch), but there is no way I am riding my bike out to Emily's graduation party. A) It's hard enough to drive a car on the highway! I'm fairly certain there is a no - bike rule! So that car'll have to tough it out the extra 50 miles to and from her house!

I hate bikers. I constantly want to either hit them with a car or am afraid they they'll hit me.

And I no longer really enjoy cycling after the escapade into the creeper-cycling room in the back gym. I miss my old bike that was pink and had a comfy seat. I don't even have my own bike! I got it from a friend!

Hey Susan. We were just talking about this at our house. I found biking terribly fun and terribly terrifying at the same time. I stayed in the game but kept my training wheels on until second grade. No amount of neighbor teasing affected me, just did not care. My son is the same way, at 12, he just got his first big boy bike. His last bike was a trick bike with the big spokes on the wheels. However, for him, it was about tricking his peers into thinking he was just choosing not to ride a big boy bike. To this day I love to ride and have a bike that is really cool (Electra). However, I will never attempt to ride without hands, zero interest and sometimes still go extra slow around the corners! We decided last week that it must be an inner ear thing...u either have it or you don't, but you can still have a blast on your bike! c ya. Marcy Carlson

I am rediscovering my bike, though often find excuses to drive. Just last week I headed to the local bike shop and got a sturdy rack with a bag that hangs off the sides. Now I'm joking about my enhanced rack and saddlebags, but really, I psyched that I can (in theory) ride to the farmer's market or local libraries and pick up items without a car.