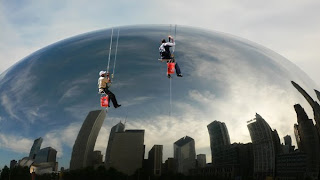 Chicago's image has been severely tarnished over the last week or so. We lost our Olympic bid in the first round of voting, a defeat that happened so quickly, the crowds who had gathered for the announcement in Daley Plaza were left dazed and confused, while echoing strains of Peggy Lee's "Is that all there is?" seemed to float on the breeze.

Prior to the vote and the other recent events that have placed Chicago squarely on the world's front page, I had been feeling a great deal of civic pride. On my brother's last trip, he remarked again how clean Chicago is compared to other large cities. When good friends visited last month, we took the El from Evanston and spent the entire day on foot, starting in beautiful Millennium Park, where they ooohed and aahhed over the "bean" and Priztker Pavilion, then wandering north up the Magnificent Mile all the way to Oak Street Beach, where they marveled over our perfectly preserved lake front.

But then came the tragic beating death of young honor student, Derrion Albert, followed less than a week later by another teen beating that resulted in a cracked skull. The nation and the world are shocked by these horrific acts of violence, but are we, here in the Chicago area, equally shocked? Most of us would like to pretend that Derrion Albert's horrendous death was an isolated incident, but the fact is that more than 30 school-aged students were killed in Chicago last year. Chicago's Olympic plan promised "uncompromising safety for the games through a fully integrated security operation … without compromising the protection of the city and its residents."

Our city cannot even deliver uncompromising security to it's most precious commodity — its children.

A few weeks after school started this year, I was waiting around the corner from our high school to pick up my teenaged twins, who are now seniors. Across the street, a group of 10 to 12 students started a shoving match that quickly escalated when one young man picked up a brick. My younger son, who was in the car with me, was terrified. "Let's just go, Mom," he begged. Instead, I called the high school security department and waited for police to arrive, which took only a few minutes, since Evanston police routinely patrol the blocks around the high school campus at the beginning and end of the day. I remember my heart pounding as I anxiously watched the dustup brew into a potentially very dangerous situation.

My daughter is infuriated every time she hears of another act of school-related violence. "Everyone thinks Chicago and Evanston students are a bunch of gang-banging thugs. Most of us aren't like that." When I asked if she is ever afraid at or around school, she said "No, I feel perfectly safe." I wish I had that same sense of security.

It's a running joke in our family that the only time the house gets completely cleaned is when we're expecting company. While I won't totally cop to that, there is something highly motivating about an impending visit. One of the reasons that cleaning up for guests seems almost fun is that you can concentrate on the surface and feel fairly confident that, with the exception of a few nosy in-laws, no one will look under the bed for dust bunnies or check out your underwear drawer to see what you shoved in it.

In many ways, I feel Chicago's Olympic bid was just that — four years of cleaning up for company. We polished our lake front and swept up the streets of the proposed venues, but we didn't look under the beds or in the drawers. Dirty laundry, however, begins to stink after a while and it gets pretty hard to hide. Instead of welcoming the world's elite athletes, Chicago will be visited by Attorney General Eric Holder and Education Secretary Arne Duncan, who are both being sent by President Obama to address youth violence in Chicago. Let's hope we take this opportunity to clean up our act and protect our real future — the children of this city.

This is an original Chicago Moms Blog post. When Susan Bearman isn't busy airing dirty laundry, she can be found writing at Two Kinds of People and The Animal Store Blog.
Posted by Susan Bearman at 9:25 PM