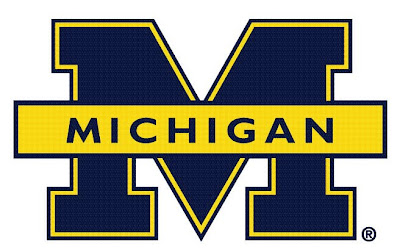 There are two kinds of people in the world: Michigan Fans and everybody else.

We are an obnoxious bunch, no doubt about it. Even after our humbling season last year (ugh, 3-9) we have not learned humility. Even though we're not crazy about our new coach, Rich Rod is looking a quite a bit shinier since our glorious win over those overweening Irishmen (affectionately known in our family as "they who must not be named").

I'm not quite sure why I love Michigan football the way I do. Sure, I was raised on maize and blue, watching my father and our Buckeye next-door neighbor exchange insults and carry out ridiculous bets. But my brother and my dad are sports fanatics. They would watch competitive tiddly winks if ESPN broadcast it. None of that carried over into my adult life — only football, specifically college football, more specifically Big 10 college football — but those other teams really only count insofar as how the outcomes of their games affect Michigan's ranking.

I could say my passion stems from my college days in Ann Arbor, during the height of the Bo years (the winningest coach in Michigan history), when I cheered on Rick Leach, Anthony Carter, Butch Woolfolk and my favorite kicker, Ali Haji-Sheikh. But, truth be told, as much as I loved going to the games, I often sold my tickets for much-needed cash. I could always count on announcer Bob Ufer to make me feel like I was at the game, though thankfully, I did not miss Anthony Carter's amazing catch against Indiana in '79 — I was there for that one. 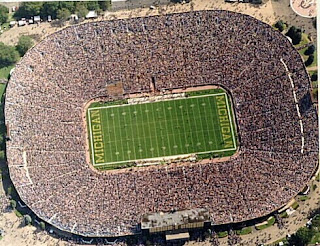 Part of the allure, of course, is Michigan Stadium. There is no place quite like the Big House to watch a football game. More than 100,000 people file peacefully in and out every home-game weekend, where there's not a bad seat in the house, and you sweat together in September and freeze together in November. I remember the first time my dad and I took my daughter to see a game when she was about 8 year's old. We tried to explain beforehand that more people would be in the stadium that day than the entire population of our hometown of Evanston, IL. When she saw the crowd, her jaw dropped; when she watched the wave circle the stands, she clapped in delight; and when the 150-member Michigan marching band took the field, she danced and shimmied right along with them. Michigan football games are just plain fun.

Though I believe children should be encouraged to think for themselves, since the minute they were born, I've worked hard to indoctrinate my kids into the cult of Michigan. Their father has had nothing to do with it (what can I say, he went to Northern Illinois). We have pictures of every one of my babies in onsies, sweatshirts, baseball caps and Ts all emblazoned with big block Ms. If it's possible to have two favorite colors, ours are maize and blue. I actually wrote a letter of protest to the Crayola company when they tried to eliminate maize as one of the colors in the big 64 box of crayons.

So what is it about this team that makes us into such True Blue fans? How can go into the last game with a 3 and 8 record (as we did last year, in our worst season ever) and still show up for the Ohio State game hoping to win and knowing it will be a good year if we can only beat the Buckeye's during this final, best and always most important game? Why do we TiVo the games and cast the evil eye if someone threatens to be a spoiler before we can get home to watch the game ourselves.

It's a magnificent obsession, a heady curse that brings us Wolverines together on a dozen Saturdays each fall to experience once again the joy of victory and agony of defeat as only Michigan football can bring it. This year, we are trying to convince ourselves that this is still a transitional season, that it will take time for everyone to get used to the new coach and to build a new program. My brother claims he'll be happy with eight wins, a victory over one of our big rivals (Notre Dame, Michigan State and Ohio State) and no more scandals. He's lying. Even though we beat the Irish, like the rest of us, he won't be happy unless we beat Ohio State to become the undefeated champions of the Big Ten.
This year, we start the season 2-0. We feel good. We've got force in our QB with Tate Forcier. We've got another great kicker with a kick-ass name — Zoltan Mesko! We've even got our gloat back. Go Blue!
Where are your loyalties? Do you have a favorite team you cheer for, win or lose? Or do you think spectator sports are a waste of time? Do you have some other inexplicable passion or loyalty? Click here to show us your colors (Buckeyes need not apply). And if you want to see a real True Blue fan in action, do not miss Bob Ufer in the clip below, who had "never been so happy in all his cotton-pickin' 59  years," even after broadcasting 327 ball games. Now that's a fan!
Posted by Susan Bearman at 1:37 AM

Email ThisBlogThis!Share to TwitterShare to FacebookShare to Pinterest
Labels: Bob Ufer, fans, football, Michigan, The University of Michigan, The Victors

i did not know we shared this obsessi, uh, love for the wolverines! i will be joining you in hoping, praying, and wishing we can beat ohio state this year!

You know, I never knew the depth of your feelings! I have to admit, I don't care at all about football, but it sounds fun (most of the time; last year, not so much) to be a real fan! Thanks for your post.

I'm married to a Michigan State alum. There must be something in the water up there because he and his siblings are all fanatics. Funny because their Dad is a Michigan alum. I guess he was just out-numbered at some point.

I am happy to report that my three-year-old is an avid Michigan fan -- without me even having to prompt him. I heard him laying in bed last night singing "hail to the victors . . ." to himself. He will spontaneously blurt out "Let's Go Blue!" for no reason at all.

It is a beautiful thing to see.

Ah, Caitlyn, I always knew you were a good mom.