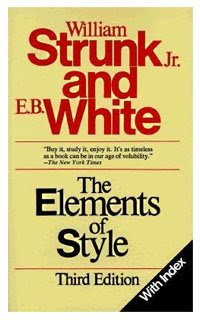 There are two kinds of people in the world: those who get the heebie-jeebies when they see this cover of The Elements of Style, and those who get warm fuzzies.
It's probably no surprise that the classic Strunk and White grammar reference is a favorite among my ever-growing collection of books on writing, grammar and publishing. My brother claims that while he recognizes when something is grammatically incorrect, I can tell you why. If that's true, it's due in large part to my reliance on The Elements of Style.
This month marks the 50th anniversary of E.B. White's reexamination of Professor William Strunk Jr.'s "little" book, originally self-published in 1918. In the 1971 third edition, White wrote in his introduction: "Today, fifty-two years later, its vigor is unimpaired, and for sheer pith I think it probably sets a record that is not likely to be broken. Even after I got through tampering with it, it was still a tiny thing, a barely tarnished gem."
My copy of that "tiny thing" is 92 pages, including the index, and cost $2.95 when I bought it in 1979. A brand-new, hard-cover 50th anniversary edition is $13.27 on Amazon.com and runs a whopping 128 pages. That pith, along with a dose of humor, is what makes this grammar book, of all things, still newsworthy after 90 years.
I admit that I'm a grammatical fuddy-duddy. E-text makes me crazy. I loathe the misspellings, lack of punctuation, and incomplete sentences that are acceptable — even expected — in e-mail and texting. I cringe as I see already-mediocre vocabularies being whittled down to a pitiful collection of abbreviations and emoticons ;-). Stop telling me that you are FOTFL and let me hear the joke. I'll decide for myself whether it's funny or not.
By Strunk & White's standards, my writing falls far short of ideal: "Do not inject opinion" (pg. 80), they warn. This blog, indeed blogging in general, would be damed for "affecting a breezy manner" (pg. 73):

The breezy style is often the work of an egocentric, the person who imagines that everything that pops into his head is of general interest and that uninhibited prose creates high spirits and carries the day.

But despite the harsh criticism that I imagine I hear directed at me from beyond the grave, I still treasure the advice and simplicity of The Elements of Style. Times change, language grows, and grammar evolves, but evolution does not mean obsolescence. Grammar is the framework upon which we build our stories, the bones that define the features of our characters, and the shiny mirror that allows us to reflect our meaning and our society with clarity and precision. Keeping a few good guides on your desk or bookmarking them online just makes good writing sense.

If you have any young friends who aspire to become writers, the second greatest favor you can do them is to present them with copies of The Elements of Style. The first greatest, of course, is to shoot them now, while they're happy. — Dorothy Parker

If you hate the book because you think it has weakened our study of grammar by reducing it to a mere 100 or so pages, you might enjoy Geoffrey Pullum's "50 Years of Stupid Grammar Advice." If you hate it because you think grammar is stupid and unnecessary (or are just a word nerd, like me), check out Marc Acito's commentary on NPR's All Things Considered called "Who Needs a Manual to Write Real Good."
For those who have not run screaming into the night, you may be interested to know that the revisions to MLA (Modern Language Association) Style also go into effect this month.
Happy anniversary, Mssrs. Strunk and White, and thanks. If you have a grammar horror story or favorite writing reference to share, please click here.
Finally, in honor of National Poetry Month, here's Carl Sandburg on grammar:

I never made a mistake in grammar but one in my life and as soon as I done it I seen it.

So, being your daughter, I had to actually look up what the hell "FOTFL" meant. And while I'm certain you meant the first entry to be the definition you were searching for, the second cracked me up. "Fiber Optic Transmission Fault Location."

Might I also add, my school, with it's BRILLIANT English department has never actually USED MLA. At least, when I was an underclassman we didn't. We didn't even use Chicago. We made up our own. So, I really couldn't care less that they're making revisions to MLA.

It includes a downloadable pdf of a teensy "best of" version of S & W.