Help, My Son is Morphing into an Avatar — CMB Post 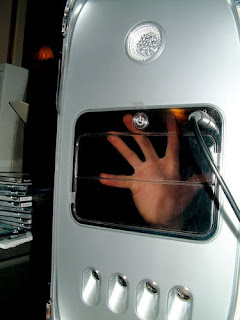 There is something familiar about the figure slouched in the office chair, face aglow in the eerie light of the monitor. I can still see traces of that sweet little boy who used to talk my ear off, but it's hard to recognize him, since I only ever see him in profile anymore, and his earphones tether him to his computer. There is an occasional deep-voiced giggle over the latest Dane Cook video, but otherwise just the quiet, rhythmic tap dance of keyboard and mouse clicks.

I know I'm not the only mother who fears losing her teenage son to screens, but I'm kept awake at night with visions of him actually falling into his monitor and becoming an avatar. If I look closely, I swear I can see the edges of his face turning into thick dark lines, while his visage flattens into two dimensions in Web-ready colors. The sad thing is, I think this is a fate he would welcome.

My son, now 17, was born 16 weeks prematurely. While he is doing great given his desperate prognosis at birth, he struggles with ADD, a short-term memory deficit, delayed social skills and a few other learning disabilities. It's ironic to me that a child who has difficulty concentrating can become utterly engrossed in the artificial world of video games, but this is a common scenario. According to Larry Silver, MD, video games hold particular appeal to kids and teens with ADD: "A child who's bothered by distractibilty in the real world may be capable of intense focus, or hyperfocus, while playing," says Silver. "For children who struggle with social skills, or lack the skills to play team sports, these games entertain and level the playing field. Computer games are emotionally safe."

That's my son in a nutshell. So, what's a mom to do? We recognized early on that technology was this particular child's friend. With poor graphomotor skills, he needs the computer to communicate his thoughts. His handwriting is large and difficult to read and we have discovered over the years that he actually produces more writing, both in terms of quantity and quality, when he types. With poor organizational skills, the capacity to email work back and forth between home and school has greatly improved his ability to complete assignments and turn work in on time.

But it is his poor executive functioning abilities, those areas of the brain that allow you to monitor yourself in goal-directed behavior, that stymie our efforts to help him use the computer to its greatest advantage while setting reasonable limits on screen time. We've tried everything:

We moved his computer into a public space in our house. It used to be in his bedroom and we never saw him. He'd hole up there, with the door closed and lights out, clicking away all hours of the day and night. Moving his computer into the dining room has allowed us to monitor the time he spends online, see exactly what he is doing and get his attention when we need him to do something else.

We have tried timers over the years for a variety of purposes, with little or no success. The best timers are programmable ones, where we set his computer with a password that only allows him access for certain times during the day. This works fairly well, since there is no arguing about "five more minutes" or "wait until I get to the next level," but with a high schooler who has legitimate school-related computer needs, the passwords can get in the way in a busy household. We are working on a system that will allow him access to some Websites all the time, while limiting access to other sites except during proscribed hours.
After all the stress, tears, punishments and rewards, my question is this: should we be limiting his screen time at all? What is the benefit of setting screen limits at this stage in his life? As long as he gets his homework done and helps out when asked, is it important to continue to restrict the time he spends at the computer? True, if left to his own devices he would probably always choose "virtual" over "reality", but when we insist, he does participate in other activities.

Chances are that any work he pursues in life will involve computers. While it's true that he does play a lot of video games, he also uses his computer for a wide variety of purposes. For example, he recently joined a graphic arts chat forum. This is the kind of social networking he never would have done in the "real" world, even though there is probably a graphic arts club at his high school. To join would require finding out where and when the meetings were held, signing up, remembering to go, and putting himself into a difficult social situation. It just wouldn't happen.

He also subscribes to several news feeds and, consequently, is pretty up on current events. He reads (and I believe sometimes even writes) fan fiction. Why is it any more valid for him to read newspapers or books than online news sources and fiction Websites?

Here are my moral dilemmas: Why should I limit his computer time to, say, an hour a day when I certainly spend more time than that on my computer? If I am constantly forcing him to do something else — anything else — besides computers, will he ever really enjoy those things? Can you, or should you, force someone into social situations that do not appeal to him?

Why should I limit his computer time when I don't limit his twin sister? This is a particularly difficult question for me, as she, too, spends a lot of time online, multitasking away at a lighting pace — IM-ing with six or eight of her closest friends, downloading music, researching her history paper, creating graphic collages and shopping for new boots — all at the same time. But, and this is a big but, she has a big life away from her computer, and he does not. There is also the fact that she spends little or no time playing video games, and that somehow seems to make her time online better or more productive. When I look at that in the clear light of day, I can see the double standard.

Finally, this teenage boy has two younger brothers who have just as much interest in gaming as he does. I have to be careful with any precedent I set, for I will have to live with the consequences of that decision for many years to come.

This is an original Chicago Moms Blog post. When Susan isn't busy being a computer cop, she also writes about Two Kinds of People, as well as about pets on The Animal Store Blog.

Photo credit: "Slaves" by Cleopapu via flickr.com.
Posted by Susan Bearman at 8:41 PM

This is a great post. I have younger kids, but relate to your struggles.

My oldest, a screen addict, is only ten, so we can and do limit his screen time and that of his younger brother. My younger one loves his video games, too, but is not as deeply attached to them. And then there's me, the blog/Twitter queen who spends a lot of time in front of the computer — probably too much — aware that I need to set a better example.

With my kids, I can still encourage/force them to get involved in real world activities- sports, school band, etc. Can I continue to do this as they get older? I don't know. I'm looking forward to your follow-up posts!

I so relate to your post and although my son does not have ADD, I believe most parents of teen sons have this problem to some degree or another. Good point also on our modeling behavior as adults. I also have similar dilemma regarding the sibling. So... what is the answer? For our family, we place a high priority on an active life; social, sports etc. And, I think if school and activities (both physical and social) are in place fully, then I'm left wondering why not? My concern are the activities (reading books for instance or dreaming of a new....something) that ARE NOT done because free time is so fully used to entertain. I know they are going to use computers in their adult life, I just don't think ALL the time spent on the computer entertaining themselves (that's what it is after all) is necessary. How and when to draw the line is tricky, difficult and frustrating. I struggle with it mostly during holidays and week-ends as weekdays are so full. Did I answer anything?? No. I'm sure I didn't.

I struggle. i struggled. i will struggle.

I can relate to this, but through my brother and not son. I have to figure out a way to get him out of the house.

Yes it is true those who have difficulty interracting in social life tend to go into computer games...for their own comfort level, why don't you develop a relationship with your son that you talk about it?

I believe if he finds comfort in doing it ...let him. Also introduce him to edutainment games where he could be with the screen and also learn. may be it may help.

Thanks for your comment Wow. I agree that it's important to keep the lines of communication open and I try very hard to do that. I have even tried, on occasion to delve into the gaming world — but I'm a sad video gamer. I do draw the line at blow-by-blow descriptions of everything that happened during the most recent for hours of game play. I just can't take it.