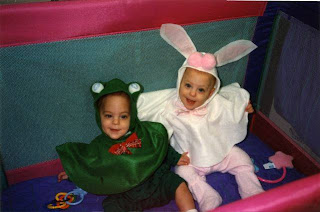 "Are you still working on those stupid costumes?" This is the chorus that rings in my ears each year throughout October. Members of this cantankerous choir include my parents, my husband, most of my friends and virtually every other parent at my kids' schools — in other words, everyone except my children.

I realize that, to outsiders, our tradition may seem a bit OCD. So I spend 200 hours a year sewing Halloween costumes for four kids, at least two of whom are now really too old for trick or treating. So what if I'm up till dawn in the days counting down to the 31st, trying to put the finishing touches on Broadway-worthy costumes that will only be worn for a few hours. When the witching hour finally arrives, our theme will shine. (Do you doubt? Click here for pictures.)

It all started 16 Halloweens ago. My premie twins, born the November before, were finally out of the woods after a harrowing year of near-death experiences, five months on the NICU and 11 months on oxygen. Halloween '92 was the first holiday in their nearly year-old lives that we were actually going to celebrate.

These lucky babies were barely sitting up and not remotely ready to party, but my husband had just bought his pet store and our theme was clear. The tiny boy became a frog and the little girl transformed into a little bunny. We held the store's grand opening over the holiday weekend and the cutest animals in the shop smiled at our new customers from the depths of the Pack 'n Play.

Boy/girl twins lend themselves pretty easily to themed costumes; we did Raggedy Ann and Andy, Mickey and Minnie Mouse, and a couple of clowns. But then came one baby brother followed closely by another and the theme got complicated. The Wizard of Oz worked well, even though Dorothy towered over her Tinman twin, and when my middle guy first saw his costume, he sobbed because he was afraid of it. We assured him that this was a perfectly appropriate response for the Cowardly Lion. The little guy, just barely toddling, couldn't have been a cuter Scarecrow.

One year, the world's tallest Tinkerbell reigned over Peter Pan, Captain Hook and Tick Tock, the alligator who swallowed Hook's hand. But once we had exhausted all the obvious themes featuring three boys and a girl, we had to get creative.

By now, the kids were fully vested in the theme and had their own ideas. One year, we did candy: a Hershey's Kiss, a chocolate bar, a red M&M (or would that be just one M?) and a Tootsie Roll. They were game pieces one year, and objects of the universe another. Sometimes the theme was stretched pretty thin, like our "nautical" year (Captain Jack Sparrow, the Pirate Queen, a Navy admiral and a scuba diver). Last year, they were royalty — Julius Caesar, Anne Boleyn (complete with bloody neck), a shiny knight and young King Arthur.

So here we are, mere days before Halloween and I'm further behind than ever. It's not entirely my fault, since it's harder and harder to achieve consensus. For example, my daughter has a new obsession and insisted that she wanted to be a forensic anthropologist for Halloween. OK, you figure out how to make that costume — and where's the theme?

After much obnoxiously loud arguing spirited debate, my youngest came up with a "Halloween" theme, where everyone would represent one of the iconic Halloween symbols. He claimed the girl could have her forensic wish and still comply with the theme if we made her a skeleton and labeled the bones (she actually bought that!). The genius with the big idea is going to be a spider. ("Not a cute spider, mom, a scary spider.") The oldest boy is going to be a Charlie Brown ghost — you know, a sheet with 27 eyeholes cut out — and carry a pillowcase that says "I got a rock." And the middle guy will be a mummy.

My daughter recently pointed out to one naysayer that our days of themed Halloweens are numbered; the twins will be seniors next year and that will be that. So, the answer to that perennial question for this penultimate Halloween is, yes, I'm still working on those stupid costumes. And loving every minute.

This is an original Chicago Moms Blog post. When Susan isn't busy sewing her fingers to the bone, she can be found typing them to the bone at Two Kinds of People and The Animal Store Blog.
Posted by Susan Bearman at 11:05 PM

I resent the above mocking statements.