Wordless Wednesday #9: Into the Mystic? 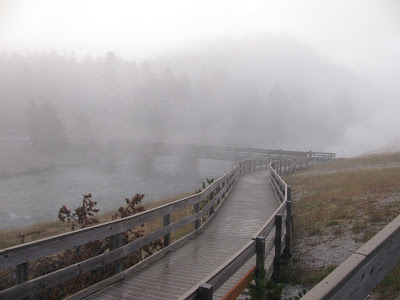 Each week, I post a photo and give you ways to participate:
If you have a graphic that has 2KoP Wordless Wednesday potential that you would like to share, let me know.

(And for more Wordless Wednesday fun, check out our weekly posts on The Animal Store blog.)
Posted by Susan Bearman at 7:57 PM

And, if I'm right (and even if I'm not), there are two kinds of people: Those who have walked along the steaming geysers, mudholes, and paintpots of Yellowstone, and those who have not.

There are two kinds of people: those who walk through the fog and those who turn back.

Yes, Alicia, you are right. And if you're one of the two kinds of people who haven't visited this National Treasure, make every effort. I expected grand, but it was beyond my imagination.

Margot—which are you? I always expect fog to be unsettling, but it fascinates me every time I see it.

Oh, I've been there, Susan. We spent several days there in the summer of 2010. If you're interested, my blog has 6 different posts of pictures in July and August 2010.

Start here and then either go to Newer Posts or click the links on the side!

(I always like looking at other people's photos of places I've been...)

Great photos, Alicia. Although, you would have to be a tragically bad photographer if you didn't get at least a few great shots at Yellowstone. Point and click often enough and you're bound to get something great, just because the beauty abounds.

There are 2KOP: The kind who cross the footpath, and the kind who must sleep under it.

There are two kinds of people:
those who amble into the fog and lose their bearings, and those who wait in the fog and lurk like a spider.

There are two kinds of people: one who stops to stare at the mist and doesn't move forward, and the other who looks at the mist and walks into it, curious about what she might find in there.

Chai — wow, that's pretty profound. Were you thinking of the homeless, or maybe more along the line of the story of the three billy goats gruff?

Jason — I didn't know spiders hid under the cover of fog. Good information. You always have to watch out for lurkers.

Claudine — I've done both. I find fog mesmerizing, but I've also taken the plunge, like I did the day I took this photo.

Susan - I walk through the fog. Fog changes the way the world looks. You never know what your going to see (or find if the fog is thick enough). For better or worse, I find the journey more engaging when it's not quite clear.

I used this photo as a writing prompt. The two modes of me.