We Didn't Start the Fire 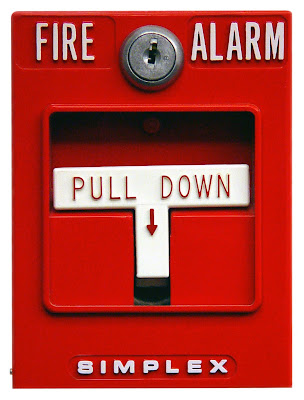 Education is the ability to listen to almost anything without losing your temper or your self-confidence. — Robert Frost

There are two kinds of people in the world: firefighters and arsonists. I won't bother to point out the inciting incident that fueled this essay. Regular readers will know what it was, and the flamers who ignited it won't be back to read this post.

Let me acknowledge from the outset that this post could land me firmly in the old fuddy-duddy category, someone longing for the "good old days" when people were kind and respectful to one another. I won't cop to full-fledged curmudgeon, but I will admit that I'm tired—tired of the endless shouting, impatience, and boorish behavior that I see almost everywhere I look.

Civil discourse is neither civil (polite or courteous) nor discourse (verbal communication; conversation). We're  too busy shouting and calling each other names that we can't even hear each other, let alone take the time to imagine what it might be like to walk in another's shoes. Does anyone else remember learning "Robert's Rules of Debate" in school, like rule #43, Decorum in Debate:

"In debate a member must confine himself to the question before the assembly, and avoid personalities."

Can't say the I've seen much evidence of this rule in the recent GOP primary-related conflagrations.

And extreme expression isn't limited to public debate. Yesterday, I was waiting at an intersection as an elderly woman crossed the street, slowly, using a walker. The woman in the car behind me found this to be an intolerable delay and proceeded to lean on her horn until I was finally able to move. I wish I could say that I held my tongue (and middle finger) in check, that I had smiled at the lady in the crosswalk and ignored the woman in the other car. But I knew I was right, and that the car lady was wrong.

James Thurber said: "It is better to know some of the questions than all of the answers."

So, here a couple of questions I have about yesterday's incident.
I looked to psychology to help me understand the nature of temper tantrums only to discover a raging controversy about whether tantrums should be medicalized into something called "disruptive mood dysregulation disorder" or DMDD (I'm not making this up).

Instead of blowing my top over another abandonment of common sense in favor of excusing bad behavior, I decided to do what writers should be able to do best. I decided to tell you a story (and a half).

I may have mentioned here how fond I am of words. I'm afraid I have become overfond of a few particular words that don't belong in civil discourse. But there are two "swears" that we forbid in our home (if you have delicate sensibilities, avert your eyes, as I am about to print them here): "shut up" and "stupid".


When my youngest son was little, he threw excellent temper tantrums—full-blown, rolling-on-the-floor, fist-flaying, ear-piercing tantrums. Even better, he had the uncanny ability to read my mood and throw his tantrums at precisely the most inconvenient moment, usually in public when I was running late for picking up one of his siblings.

One day, I committed some unspeakable sin (probably suggesting that it was bedtime or that he should pick up his Legos). His face turned fire-engine red and, spit flying, he screamed at me: "Shut up, stupid, stupid, stupid."

His brothers and sister froze in horror, absolutely sure he would be struck by lightning at any moment. In a rare moment of self control, I did not lose my own temper (or crack up, which was what I really wanted to do). I simply walked out of the silent room, locked myself into my bathroom and laughed myself silly.

I resisted the urge to comfort him and said calmly: "Those were very bad things you said, and I'm sure next time you feel that angry, you'll do better."

I wish I could say that was the last tantrum. It wasn't.

A few days later, he made the mistake of throwing his fit at home when I had the luxury of time to wait him out. I was making the beds up in his room when he let loose. I made few feeble attempts to disarm the explosive device, but it was futile. When I finished the beds, I stepped over him and moved on to another room. After a few minutes, the shrieking and banging stopped suddenly and I heard the patter of his little, angry feet as he tramped through the house looking for me.

He ricocheted from room to room, finally finding me folding clothes in my bedroom. After glaring at me for a full 10 seconds, he threw himself on the floor and picked up his tantrum where it had left off. This time, I couldn't control myself, and burst out laughing. I laughed till tears rolled down my face. His tantrum finally lost its steam and he rushed to me, throwing his arms around my neck: "Don't cry, Mama," he said.

So, has the youthful fire in my belly petered down to a mere smoldering heap of curmudgeonly ashes? And if so, can I at least request that we raise the level of our insults from tedious "F yous" to something more interesting, say along the lines of Shakespeare? At a loss? Try this handy-dandy Shakespearian insult generator. Feel free to hurl them in the comments.

Posted by Susan Bearman at 9:42 AM

Best of luck allowing the fire to burn itself out. I was shocked at all the responses and intrigued by the ways people molded what they wrote to be relevant but still disdainful. All the discussion did cause me to re-read the essay and think more on how it was written and what I thought of the style. I think I've grown a little. For that, I thank you.

Margot, you managed to sneak in a comment before I had even finished my thoughts (I hit "publish" instead of "save" early on in the draft of this post). I hope you have the chance to finish reading it. In the meantime, thank you for your early comment. I appreciate it.

Glad you survived your firestorm. Nothing like burning down the house to know you did something new.

As for tantrums, I have a little fire starter in my home who burns out fastest if left to wail it out in her room.

Thanks for the Shakespeare insult kit. You made my morning!

Susan, you continue to amaze me with your wide-rangiing wealth of resources! Loved reading about your handling of tantrums. "Shut up" was a punishable offence when I was growing up. Also, thanks for supplying me with my latest reason for procrastinating: Susan Bearman made me do it.

Victoria — That's exactly how my girl firestarter was when she was little. I would peek in occasionally and ask if she needed help. She would usually just shake her head no until she was too tired, then she would invite me in. I love the insult kit, too.

Candace — I'm always willing to take the blame for your procrastination. "Shut up" still grates on me. It's so demeaning.

There's so much you touch on here in your 'out-of-the-ashes' reflection. Like you, I think a lot about the nature of language. 'Civil' disobedience would seem to be an oxymoron, and, yet, it's anything but. Nor is there anything fuddy-duddish (did I make up a word?) about wishing people would take the time to THINK before they speak/write. And I can't help but think that the very nature of our speeding lives -- in fast cars, in Cyberspace -- short-circuits us into inappropriately reactive modes. Yes, indeed, laughter is the best medicine.

I'm new here and don't know what the inciting incident was, but I will say that if you're an old fuddy-duddy than I'm one, too. When I hear what passes for acceptable media commentary these days, I'm mortified. As for horn honkers, I'm blessed to live in a small rural community where being stuck in traffic just means being behind your neighbor's tractor.

I'm glad I came back to this post. So much more to think on!

The thought of DMDD being a medical out for underdeveloped impulse control makes me what to have a bit of a tantrum myself. As I engage in professional debates, I work to consider and edit what I have to say BEFORE I say it in order to be taken seriously and direct the outcome of a discussion. I fear that the ability, and even desire, to control communication is becoming lost in all the fights we just must win. The fear comes in because there is no compromising with emotions. They sweep away all reason and control. The only choices left seem to be devastate or abandon. And I'm just not sure that is how we should be making all out decisions.