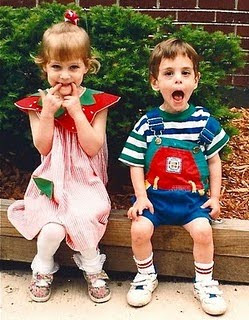 News flash — there are two kinds of people in the world: boys and girls. A long time ago, BC (before children), I used to believe that most of the differences we observed in female and male behavior was almost entirely the result of the way we raised them. Then I had twins — a boy and a girl — and I realized I was wrong. Boys and girls are different.

For example, my daughter has not once in her 18 years felt a need to make a vehicular noise. My three boys, on the other hand, practically came out of the womb saying "vroom, vroom". They know every kind of car/train/truck/plane/boat, what it's called, what it does and the particular noise it makes. In fact, my boys are virtuoso Foley Artists. Every action, game and story is accompanied by myriad sound effects. Let's face it, boys are noisy.

You may not believe me (unless you are a mother of twins), but I did not treat my boy/girl twins differently in their formative years. Frankly, I didn't have time. I changed one diaper, then I changed the other diaper, then … well, you get the idea. They had toys. They played with them. I did not tell them which ones to choose, and they often played together. My daughter would play with her doll, rock it, feed it, scold it (can't imagine where she picked that up), and put it to sleep. My son would sing "Ahh, ahh, ba-by," then toss the thing over his shoulder. My son would crawl around the floor for hours with his toy cars and trains; my daughter would occasionally join him by bending at the waist and using two hands to push a vehicle across the room. Then she was done.

It didn't take me long to realize that girls are not nearly as enamored of bodily fluids and functions as boys are. My daughter does not fall on the floor laughing when someone in the room passes gas. She has never once competed in the practically nightly belching contests that go on after dinner (that's all on their dad; I've tried to stop it).

Girls and boys have very different ideas about fashion. Since the age of two, I have not been able to tell my daughter what to wear. She has distinct ideas about her wardrobe and accessories and, thankfully, has grown into a young woman with taste and style (which she does not get from me). Fashion for her brothers means just one thing: comfort. "Mom, I don't like these socks. The line on the toe bugs me." "Mom, you know I don't like jeans. They're too tight and the zippers are a pain." That's right, my boys prefer elastic-waist pants because zippers present too big of an inconvenience.

And in terms of personal bathroom habits, let's just say that girls have much better aim. I can't tell you how often my boys have tried to blame the mess around our toilets on their sister. How dumb do I look?

You may protest that this is all anecdotal evidence, that there are plenty of noisy, unkempt, fart-loving girls out there; and plenty of quiet, fashion-forward, fastidious boys, as well. All I can tell you is that as a stepmother of a boy and girl, and a mother of three boys and one girl, I have gathered extensive evidence about these basic differences. Call it stereotyping if you will. I call it fact.

Throughout my parenting years, I have been fascinated to be an observer of this vibrant laboratory of psycho/social experimentation that we call home. So why am I suddenly obsessing over these gender-based differences? Simple. My daughter is going off to college in the fall and leaving me alone with her father and three brothers. The balance of power in this household is about to tip decidedly away from my favor and I'm terrified slightly anxious about the transition.

Don't get me wrong. I love all my boys more than I can say, but I know things are going to change and I think I'm going to need some help. To that end, I am setting up a nonprofit charity to save my sanity. Donations of estrogen, chocolate and cash are welcome.

This is an original Chicago Moms Blog post. When Susan Bearman isn't busy charting the differences between male and female behavior, she writes a blog about all the other Two Kinds of People in the world, and freelances at www.bearman.us.
Posted by Susan Bearman at 10:37 PM

Rita said...
Love this post! So good to hear that it's not just my household of boys that is so infatuated with bodily noises. I can't help with cash or estrogen, but I will most definitely share my chocolate with you!

Susan @ 2KoP said in reply to Rita...
Hi, Rita. Thanks for the chocolate offer. I'll probably be taking you up on it.

Angie B said...
So funny! As a mom of two boys and two girls, I have to say I'm in total agreement with you. Only, my girls are SO much harder to manage than their brothers were! My husband and I often say that we should've had them first, when we were younger and stronger---then we admit that if we had, we probably wouldn't have had the boys at all!

Angie B said in reply to Susan @ 2KoP...
You're right of course, I'm sure I thought my boys were hard when they were younger (maybe because they were only 16 months apart and double-teamed me!) but now that they are teens, they seem like cake compared to the girls (5 and almost 2). Of course, some of it may also be because I'm no spring chick anymore! :)

Susan @ 2KoP said in reply to Angie B...
Hah, my boys are only 16 mos apart as well, and they came five years after my twins. Maybe that's why I'm so tired.

Neat perspective that validates what I have thought for so long!

Hi Dwana. I definitely learned a lot from having twins. It's been a real privilege (and a blast) to raise them.

Hey Susan,
I have a boy and girl, not twins, and saw the same thing. My belief is that stereotypes cover the 90% rule, I imagine there are the occasional kid who does not line up, viva la difference! My personal fav is: I never had any kind of gun or gun reference in my house, and yet when my son came along he took my daughter's barbies, separated the legs, grabbed one leg and pointed the other leg at me and made shooting noises...is war genetic mapping?! Crazy.

Love it! As the mom of two boys, I totally get this. In my twenties I would have told you that "boys will be boys" line was a load of crap, a lame excuse, but as a mom? OMG, nature plays a bigger role than we ever could have fathomed.