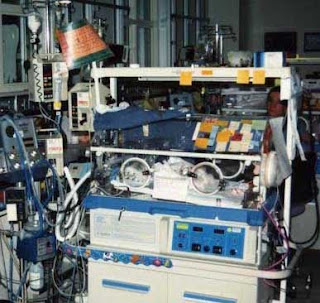 "They look like space aliens," said my 12-year-old stepson. And they did. Born at 24 and 3/7ths weeks gestation, my twins spent five months on the neonatal intensive care unit, with tubes and wires attached to every part of their little bodies. The ventilators huffed and the monitors blinked and bleated day and night. Nurses shaved their plum-sized heads in a quest to find viable IV sites, and their little toes glowed red from the pulse oximeter that measured their blood oxygen levels, just the way ET's finger glowed.

But chances were with us and this week we celebrate their "golden" or "star" birthday, when they turn 17 on the 17th, in perfect health as juniors in high school. It was a long haul. They spent nearly a year on oxygen and reached every milestone months (in some cases years) after their peers, but they did reach them. In honor of their birthday, I would like to share 17 of the many gifts they have given to me:

1. Good things come in small packages. These babies were literally gifts, their conception the result of a fertility treatment called gamete intrafallopian transfer (or GIFT).

2. Live in the moment. Until I was hospitalized 11 days before their birth, I wished my life away, always hungry for the next thing: growing up, going away to college, moving to a new city, getting married, buying a house, getting pregnant. Because we didn't know what the next minute would bring as we tried to stave off their premature birth, I saw for the first time the value of living in the now.

3. Be grateful for the simple things. Breathing is beautiful and not to be taken for granted. So is peeing, which I learned as we prayed for my baby boy to urinate as proof that his kidneys were not shutting down.

4. Never wake a sleeping baby (thanks mom). When my daughter came home on March 10th, nearly five months after she was born, she weighed four pounds. I was told she would act like a newborn, waking every two hours to eat. She didn't. That first night home, I watched her sleep. When she didn't wake at the two-hour mark, I put a mirror by her mouth to make sure she was still breathing, even though she was on oxygen and electronic monitors. I stared at her for two and a half more hours before she finally woke. She was tired; people had been poking and prodding her for months. From that night on, she slept six hours at a stretch, just like a real baby.

5. Everyone is different. These twins who shared so much were completely different right from the start. I learned that comparing them to each other or anyone else was pointless. I also learned to stop comparing myself to others.

7. Boys and girls are different. It's not nurture, it's nature. I did not have the time or energy to give these boy/girl twins different toys or different kinds of attention. Girls mature faster, boys are noisier and more physical. Are these generalizations? Sure, but they're generally true.

8. Everyone has strengths and weaknesses. My son has struggled mightily in many ways, but you would never know it to meet him. He has a short-term memory deficit, which makes learning by rote very difficult, as well as finding things, like your homework or your socks. On the other hand, each day is a brand new adventure, and he never suffers from emotional hangovers. We could all use a little more of that.

9. You are what you think you are. My son was diagnosed as small for gestational age for most of his life. Until he was 14 and had been on growth hormone for four years, he never even reached the lowest percentile on the growth charts. He was always the smallest kid in the class, but when you asked him how big he was compared to his classmates, he would say "Oh, about in the middle."

10. Trust yourself. We have had the benefit of hundreds of talented, dedicated professionals who have helped bring these children to where they are today. But I am their mom, and I know them better than anyone. To become an effective advocate for them, I had to learn to trust myself.

11. Ask for help. As the saying goes, it takes a village. A neighbor of mine took me to a Mothers of Multiples support group meeting even before the babies came home from the hospital. Those women saved my life. I also found therapists when we needed them, as well as a great pediatrician, not to mention all the times I leaned on my parents, other family and friends.

12. This too shall pass — and faster than you think. When they were little, it seemed that we'd be mired in diapers forever; we weren't. My son was finally potty trained at four and a half. It seemed like they would never talk; they did — at four. The problem with "this too shall pass" is that it applies to the sweet times, as well as the sour ones, so pay attention or you might miss something good.

13. Read aloud together. They are 17 and we still read together — not every night, but often enough. I have loved this time together (except the Go, Dog. Go! phase).

14. Never give up. These tiny, frail, vulnerable babies (fetuses, really) are the strongest people I have ever met. They survived more challenges in their first year of life than most of us do in a lifetime: ventilators, lung damage, jaundice, retinopathy of prematurity, heart surgery, and invasive infections, just to name a few. They fought hard to be here.

15. Don't listen to the naysayers. I can't tell you how many people told us it would have been better if they had never been born. I was terrified at first, sad that I had not carried them to term and that their lives were going to be harder (at least in the beginning) than it should have been. But we are so lucky they were born at a time and in a place where they had a real chance to survive and, given that chance, they have thrived.

16. Celebrate. Many loving, well-meaning people had no idea how to react when they were born. We received no gifts or cards or flowers until they came home. People were afraid they were going to die. My mother handled most of the phone calls, conveying to everyone that we were celebrating. Whether they lived 90 hours or 90 years, this was the only life they would ever have. We're still celebrating.

17. It goes by fast. These children were babies for a long time, much longer than most, and yet here we are, on the edge of 17, that dividing line between childhood and adulthood. How did this happen? I swear I was paying attention.

So, my babies, Happy Birthday! And thank you.

This is an original Chicago Moms Blog post. When Susan is not sobbing over baby pictures, she can be found writing at Two Kinds of People and The Animal Store Blog.
Posted by Susan Bearman at 10:24 PM

Oh, I nearly cried right here at my desk. Woohoo for them and you!

Oh Happy Happy Birthday! What an amazing story and what a formidable mom and what a tenacious pair of twins!! Thank you so much for sharing their story and everything you learned. Wow.

This is an absolutely beautiful post. How lucky your twins are to have such a thoughtful mother.

In the DNA of Ike and Molly is Mom and Dad's DNA and I am sure Mom's loving strength and stamina and will to live surrounded these two babies like the warmest of blankets. How could they not survive and flourish with a Mom who believed in them right from the beginning.

Hooray for Ike and Molly and double hooray for Mom. A Mom who wouldn't give up, who solved the problems as they arose and found answers allowing her two precious twins to grow into the adults they are becoming. You gave them life and taught them how to live it with stamina and joy and a positive can-do attitude. Those are the gifts that comprise real love. Bravo Mom! Bravo Ike and Molly!! Happy Birthday to everyone.

I am so impressed and proud to call you my friend. You Go Molly & Ike!

Not only is this beautifully written, but it is the honest truth. I am proud to call this mom my friend since 7th grade!

Beautiful post. I love the 17 gifts. Thanks for stopping by my blog as well. I'm glad you found me and shared your links.

what a touching post! with each of the 17 gifts I shook my head thinking "yep so true". becoming a preemie parent has taught me those gifts and more!