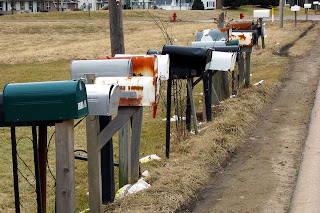 Posted by Susan Bearman at 5:24 PM

Awesome and funny. I love reading the book ephemera too! You find such interesting stuff - where that quote on page 247 came from, who the author is grateful to OR NOT, sometimes even the history of the font used.

I'm with you, Susan. Thanks for linking to me and I'll do the same. Enjoyed your chain letter missive way more than I thought I would.

Thanks, Helen. Is that what's known as damning with faint praise?

I always read the colophon, and I check the copyright page to see who designed the cover and the book interior. But I admit I skip the rest of the stuff.

I'm glad you followed the chain links backward. This was a real hoot. Parlez-vous de fromage?

Some things about me are too strange to publish in a blog.

I'm with non descript comment leaver, I like the picture of the mailboxes. I always wanted to know what would happen if , when you got a chain mail letter that said "send this to X number of people and press the __ key and the coolest thing will happen." I always thought it would crash my computer so I never did it, but I wondered who made all of that up.

Anyway: I like your six things Maman, (parlez-vous fromage? Oui, parlez-vous francais, aussi.) Yes, I'm with the other people, I read all the stuff at the beginning of the book.

Hi Susan ...
Thanks for visiting my six things - I truly enjoyed yours. Love the French words - and Bill's addition of Whiz de fromage. LOL

I had a moment when my oldest was about six. She "tested" my eyes in the back of my head, asking "What am I doing now?" What she didn't realize is that I was doing dishes in front of a window, at night... and could see every move she made. If she had any doubt about that extra pair of eyes, it was immediately dispelled. LOL And then she reported back to her younger sisters. I got a lot of mileage from that one moment!

I read ancillary materials in books, too, but not quite as religiously as you do. I enjoy the information about typefaces and their histories. I am also embarrassed to admit that I used to check the birth years for authors on the copyright page. It's fortunate that right around the time I could have started to have big jealousy issues with authors younger than I am, publishers stopped including this information.
==============
Detectives Beyond Borders
"Because Murder Is More Fun Away From Home"
http://www.detectivesbeyondborders.blogspot.com/